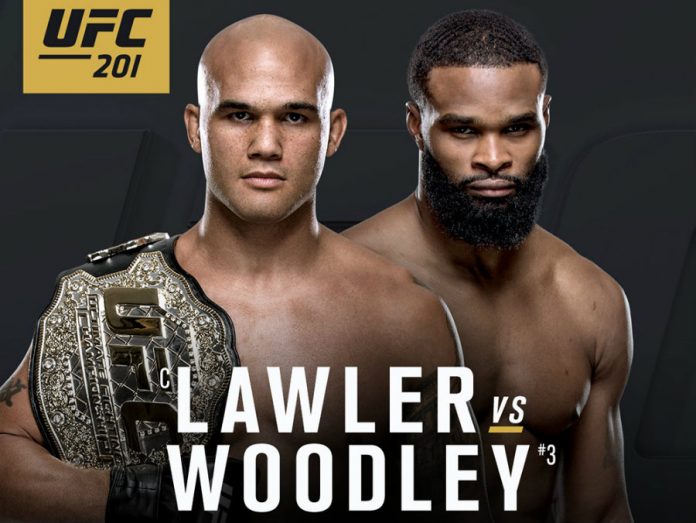 The UFC 201: Robbie Lawler vs. Tyron Woodley is the upcoming mixed martial arts event by Ultimate Fighting Championship that will be held yesterday, July 30 at the Philips Arena in Atlanta, Georgia.

The main event will feature the fight between welterweight champion Robbie Lawler and the 4th ranked fighter Tyron Woodley, this fight will be the pay-per-view main event of the evening, and it will have Lawler defending his 170-pound championship for the third consecutive time.

The Co-main event was supposed to be a fight between Wilson Reis and the flyweight champion Demetrious Johnson, but the match was canceled due to Johnson’s undisclosed injury while training, Johnson’s injury was announced on July 8.

Reis was kept as co-main event match and was matched versus newcomer Sean Santella, but the fight was also ditched because Santella didn’t have enough medical test done in time. As a result, Reis will now fight against Hector Sandoval.

The new co-main event match will have Karolina Kowalkiewicz against Rose Namajunas in a strawweight category.

A well deserved comeback or Lawler

Since Robbie Lawler’s return to the UFC in 2013, his score is 8-1, and he is currently the world champion, and right now he is currently in the top 5 pound for pound fighters in the UFC. After 15 years in the sports Lawler seems to be in the prime of his career, and his last two fights have been an astounding spectacle by Lawler.

Tyron Woodley, on the other hand, has a 5-2 score on the OFC with Carlos Condit’s match as his biggest victory. Woodley’s last fight was supposed to be vs. Johny Hendricks last October until Hendricks missed the weight. Woodley has been out of combat for 18 months.

Lawler is one of the most offensive fighters in the MMA today, being that offensive also means he has taken a lot of damage while attacking. Lawler’s disposition to get hit while attacking his opponent often gets him in trouble, but he is a very resilient fighter and a very hard one to defeat.

The time, the place and opening fights

The full UFC 201 event will feature at 7 pm the battles between Michael Graves vs. Bojan Velickovic on a 170lbs and Cesar Arzamendia vs. Damien Brown on a 155kbs,

The preliminary fights starting at 8 pm will feature Ed Herman vs. Nikita Krylov on an 185 lbs match, Jorge Masvidal vs. Ross Pearson on a 170 lbs match, Damian Grabowski vs. Anthony Hamilton on a 265 lbs match and Wilson Reis vs. Hector Sandoval on a 125 lbs match.

The Pay per view main card will feature Matt Brown vs. Jason Ellenberger on a 170 lbs match, Erik Perez vs. Francisco Rivera on a 135 lbs match, Ryan Benoit vs. Fredy Serra on a 125 lbs match.

The co-main event will be the fight between Rose Namajunas vs. Karolina Kowalkiewicz an 115 lbs match. And the Main PPV UFC 201 event will have the welterweight championship between Robbie Lawler and Tyron Woodley.

On related news one of the most expected matches will take place, that is the reboot event between Conor McGregor and Nate Diaz. Back in UFC 196, one of the most anticipated matches in the UFC had McGregor losing to Diaz. The UFC 202 on August 20 will have McGregor trying to regain his strong run in the UFC after having a rematch with Diaz.

Making things worse for McGregor, a recognized fighter on the featherweight mark on his MMA career, he will have to put some extra pounds to fight Diaz on the 170-pound benchmark, the same one used in the UFC 196 the one that had him losing for the first time in his UFC career.

On the contrary, Nate Diaz is looking bigger than ever for his upcoming match on August 20. Recently during his training session at the Ten Goose Boxing Gym against Juan Funez, his Boxing coach, Ricky Funez declared that Nate Diaz is close to a 200 pounds mark.

No. 7 ranked flyweight @WilsonReis7 made quick work of his opponent at #UFC201. @MeganOlivi asks what's next ⬇️ https://t.co/B2t6aQI6WC

If the statement by Diaz’s coach is correct, the fighter who is known for being a featherweight fighter is putting some serious preparation for the upcoming UFC 202. Diaz chances to win the match against McGregor are looking better than ever since he sounds like he is in the best shape of his life, and there is a lot of money and fame at stake.

Lastly, the rumors about why Ronda Rousey is taking so long to return to the UFC octagon keep spreading. Some people claim that the former UFC Women’s bantamweight champions had a knee surgery, and she will take the rest of the year to heal up, and some people say that she will focus on her movie projects and some people also claim that she is more worried about having a baby than coming back to the UFC.