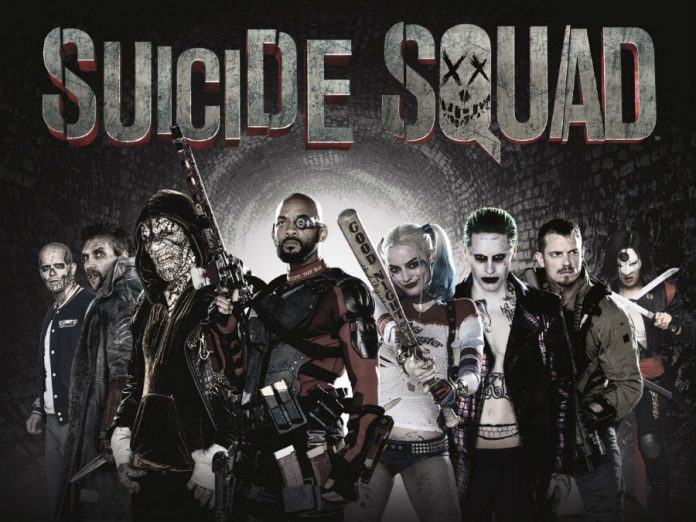 Will Smith as Deadshot is gearing up to be the fun-factor in the upcoming Suicide Squad film. The DC film about a band of villains working for the US government has been consistently changing from a dark mayhem to something more of a dark comedy in each trailer.

The main cast of the motley crew is Deadshot, a career hitman, and Harley Quinn (Margot Robbie), a psychiatrist gone criminally insane (with just a little push from Jared Leto’s Joker).

Next, comes Killer Croc (Adewale Akinnuoue-Agbaye), a huge lizard man who originates from the sewers. Diablo, who’s portrayed by Jay Hernández, can conjure and control fire while Captain Boomerang (Jai Courtney) well, uses boomerangs. Then there’s Slipknot (Adam Beach), a master of the rope, and Katana (Karen Fukuhara), also giving away her ability with her evil name.

Standing outside the punk-rock characters are Batman’s oldest enemy, the Joker, and Enchantress, an ancient which played by Cara Delevigne.

While they are all weird and mad enemies of society, all of them nine can agree to one simple thing: the Prince of Belair is the lead singer in the chorus.

News Corp Australia Network approached the 47-year-old actor and heard a tale of how he took it upon himself to turn the set into a welcoming place.

“These kinds of films can be f—-ing grueling, and producers get stressed and everybody’s job is on the line at the studio…I looked at myself as the buffer between that at my cast, you know? I wanted the actors to have a good time, to not feel the pressure,” said the face behind Deadshot.

His colleagues agree. Smith even threw a party for the whole team, cast and crew, and he sang some of his famous rap songs.

In his 40s’, with $9 billion in box office to his name and two Oscar nominations, he’s certainly the most experienced actor in the movie. He’s been there, done that. Even as Hancock, he already made a breakthrough into the superheroes flicks.

This rings especially true for Fukuhara, a 24-year-old Japanese-American actress who’s making a debut in the film industry. Smith even decided the final look of his character, now inspired in hip-hop impresario Suge Knight, who is currently awaiting trial on a murder charge in jail.

With the 20kg suit on, a big scary weapon and his all-around shaved head, the Squad has nicknamed him “The Thug Prince”.

Even though he is the most prominent actor in the movie, Smith states that the best characters, the ones set to freak the fans, are between Harley Quinn and the Joker.

Established in the growing DC Extended Universe after the 3 hour Batman V Superman flick, and before next year’s Justice League and Wonder Woman, this chaotic story is the misfit outcast of the DC family.

The movie doesn’t follow the events after the second installment of the Man of Steel, and it also won’t feature Henry Cavil’s character. Lucky fans won’t be forced to see Lois Lane entangled in the center every single plot line yet again.

Instead, this chaos is unleashed when a covert government agency assembles a team of supervillains for a morally questionable and dangerous mission. Amanda Waller (led by Viola Davis) from Argus imprisons the Squad in an underground jail and forces them into a do-or-die situation.

Ben Affleck’s Batman is sure coming up to the movie. Trailers have already spoiled a massive car chase between the bat-vigilante and The Joker. He is also set to cross path with Deadshot in a fight everyone can expect to be memorable.

David Ayer’s Suicide Squad hits the screen on August 5 with a sequel already in the oven. Batman V Superman, despite the harsh critics, made $872.7 million in a box office, holding the number 4 spot in 2016’s box office. The upcoming DC release is expected to do even better.

In the top of box office remains Marvel’s Captain America: Civil War with $1.15 billion. Also, this year we got to 20th Century Fox releases: Deadpool, with $760.3 revenue in the box office, and X-Men: Apocalypse, with $534.3 million in the box office.

It’s success, aside from its cast, mostly depends on r David Ayer. In recent years, he has directed co-written Sabotage and Fury but has no experience in the field of super-heroes. Much less in the anti-villain story or the meta-human conflict.

While you expect the premier, check out Will Smith’s appearance on the Jimmy Fallon show, where he rapped his entrance to the set with a Men-in-Black attitude.