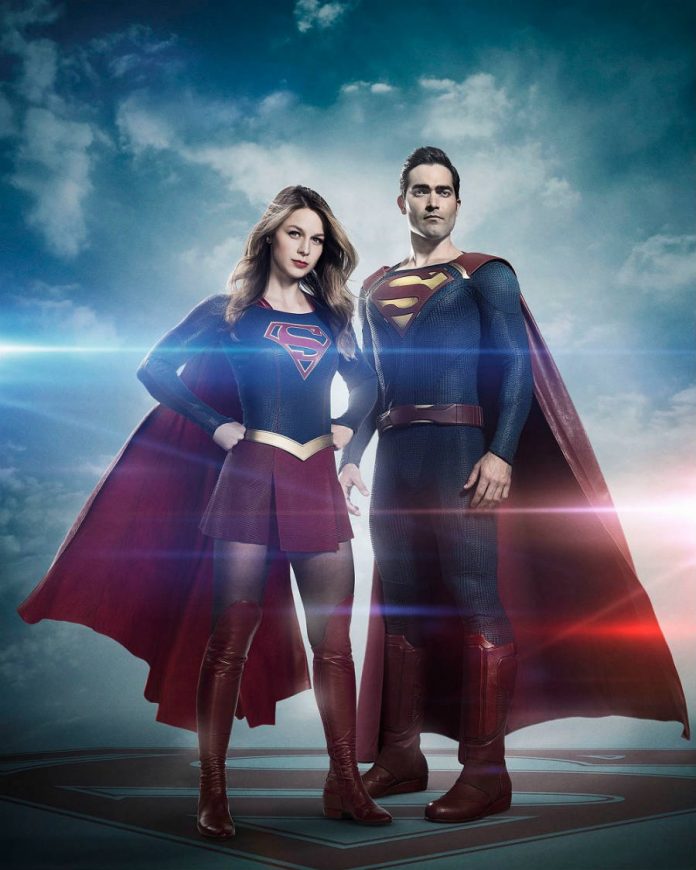 Supergirl’s season 2 will air on October 10, 2016, after being renewed for a second season, the superhero show will move from CBS to The CW this time. For Season two it was announced that Superman would finally appear on the series, this time, the role will be played by Tyler Hoechlin.

During Comic-Con the producers and the cast gave a panel along other DC Comics shows like Legends of Tomorrow, Arrow and The Flash. During the panel, Producer Sarah Schechter spoke about how Supergirl’s first season solely focused on Kara Zor-El and how they cast Tyler Hoechlin as Clark Kent.

During the Comic-Con panel, the cast explained how season 1’s objective was to introduce and establish Kara as Supergirl before expanding the hero family.

Earlier today the first picture of Supergirl and Superman together was released. Superman’s outfit resembles the suits used by the hero in Man of Steel and Injustice: Gods Among Us. Kiersten Ronning designed the new Superman costume.

Hoechlin also spoke to the fans during Comic-Con, and he was beyond excited about his new role, he mentioned that there is a lot of responsibility when it comes to this character since it means so much to so many people.

The networks switch from CBS to The CW suggests that production will shoot in Vancouver, Canada instead of Los Angeles, California. As a consequence, it was unknown if some stars like Calista Flockhart would be able to return to Season 2, as Cat Grant, until both parts confirmed it.

Also as a result of Supergirl’s show moving from CBS to The CW, it might lead to more crossovers with DC Comics Shows like Arrow, The Flash and Legends of Tomorrow. Mark Pedowitz, President of The CW, said that this year’s annual crossover event will be the biggest one ever. It remains to be confirmed if Supergirl and Superman will join this event.

Last week the show also announced the casting of Chris Wood for season 2, although there were no details regarding his new role during the announcement. On Supergirl’s panel at the Comic-Con, Schechter revealed that Wood’s character is the occupant of the Kryptonian pod that server as a cliffhanger for season one finale. Lastly, Schechter suggested that there would be some conflicts between Supergirl and Superman.

The CW’s fall schedule will feature Supergirl on Mondays, Flash on Tuesdays, Arrow on Wednesdays and Legends of Tomorrow on Thursdays. It seems like The CW’s DC comic shows will have more crossover events during this following season.

Supergirl is scheduled to appear in Flash, Arrow, and Legends of Tomorrow, but whether Superman will join her is unknown

During and interview with CBR during Comic-Con in San Diego Guggenheim revealed the core structure of how the crossovers from Supergirl, The Flash, Arrow, and Legends of Tomorrow will work.

“It’s an external threat from outside the shows that will involve Supergirl coming over to The Flash, then Arrow, then Legends of Tomorrow,” said Guggenheim.

Due to the schedule mentioned before it is very likely that the threat will appear the first night of the week, and it will be dealt with throughout the whole week on each DC Comic show. Guggenheim did not reveal what kind of threat this would be, but he referred to it as an external one It is likely that it will be one different to any villain introduced in any show.

Thus far The CW has had two crossover events between its superhero shows. One had Oliver Queen and Barry Allen fighting alongside some members of the Legends of Tomorrow against Vandal Savage, while the other crossover had Barry Allen and Oliver Queen going to each other’s cities to fend off villains.

It is also unclear what will happen during The Flash Season three which trailer debuted on Comic-Con where Reverse-Flash makes an appearance. Also on Legends of Tomorrow Matt Letscher’s Reverse-Flash will help the Legion of Doom.

Regarding the Reverse-Flash suit he joked about getting his own suit for this new season, as he previously had to use one designed for Tom Cavanagh.