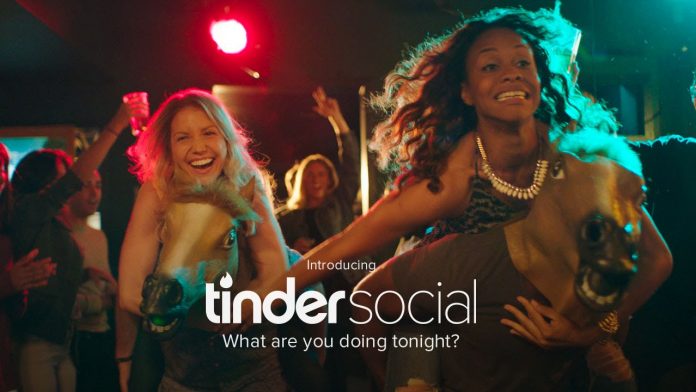 GoTinder officially announced they would release Tinder Social, and this new feature will let users to connect with friends and to synchronize their calendars.

After testing this new feature in Australia, some new things were discovered. They learned that people need new ways to plan their nights when it came to going out with friends, so Tinder updated its app to make it feel like a more real-time experience.

Tinder Social will allow its user to see who’s going out tonight and what they are going to do. There is also a new feature that will invite friends to join a group if they want to go out and you will also be able to “swipe” and match with other organizations that have similar plans.

“Tinder Social is designed to make it as easy as possible to plan your night, get out into the real world and meet new people. The new feature takes the Tinder experience to a new level, offering our users more ways to expand their social circles and interact with potential matches,” said Sean Rad, CEO and co-founder of Tinder.

Tinder Social will be available once the Tinder app gets updated, once updated the users will be able to add their friends to the group. These groups, on the other hand, have pre-existing choices like “Comedy Night” and “Attending Concert.”

This new feature will be available in countries such as USA, Canada, UK, Australia, New Zealand and London.

"It’s time to get the (literal) party started." ? https://t.co/e7uNbQC7jS via @EliteDaily #TinderSocial

They also released different features like a “share” button which is used to share user profile with friends. Tinder thinks this is an excellent way to let a friend see someone who might be just right for him/her,

Tinder also launched a new subscription service earlier this year, Tinder Plus. This service allows users to undo swipes they didn’t mean to send. Sean Rad, Co-founder of Tinder, said that this is the most requested feature due to users having a second chance with people they swiped left by mistake.

Lastly, they also introduced a new feature called Super Like. This feature was also proved in Australia, and it showed that people are three times more likely to match with someone they super liked.

According to their reports, Super Like also led to an increase in the number of women using Tinder, and it made the conversations last 70% longer when they were started through a super like.

Sean Rad spoke about how Tinder is known for being a fun app to use, but he also emphasizes how making real connections are the most important goal for their staff. He said that bringing two people to get to know each other in a way that otherwise they would not have met is creating endless possibilities.