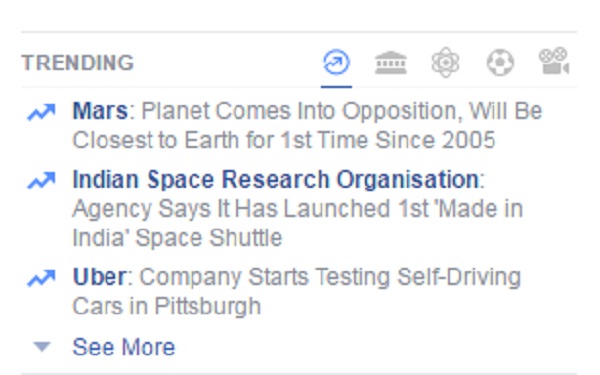 SAN FRANCISCO- After receiving complaints regarding its ‘trending topic’ feature, Facebook denied the allegations and informed that the company has not found any evidence which proves system political bias in selection of the new topics.

This was stated through a public press release and in addition, the company also forwarded a letter to Senator, John Thune, denying all the allegations.

However, Facebook has maintained that it will carry out some crucial changes within the feature to make sure that the critics are satiated.

The company plans to introduce changes within the review team. And place an oversight team which can supervise the functioning and modify the same, as and when required. The topics will be lined up in a similar ratio, just like they are now, but with a hint of oversight.

Further, RSS feeds are speculated to retire. Their substitute(s) have not been finalised though.
And the reviewers will not be able to side-line or choose topics on the basis of their importance.

Facebook’s ‘Help Center’ page wrt. to trending topics will receive an update. This will eliminate all the speculations claiming the use of some special algorithm within the feature.

Meanwhile, Senator Thune has replied with his statement appreciating the way Facebook is handling this issue.
He stated that “The seriousness by which Facebook has treated all these allegations and its desire to serve as an open platform for all viewpoints is evident and encouraging and I look forward to the company’s actions, meeting its public rhetoric.

In our opinion, Facebook could have ‘un-invited’ all these rumours and accusations by having a simple FAQ page about the feature.

Also the Senator continued that as of now, everything is in place whilst the committee is open to receiving to new info which is ‘transparent’ and not ‘regulated’.