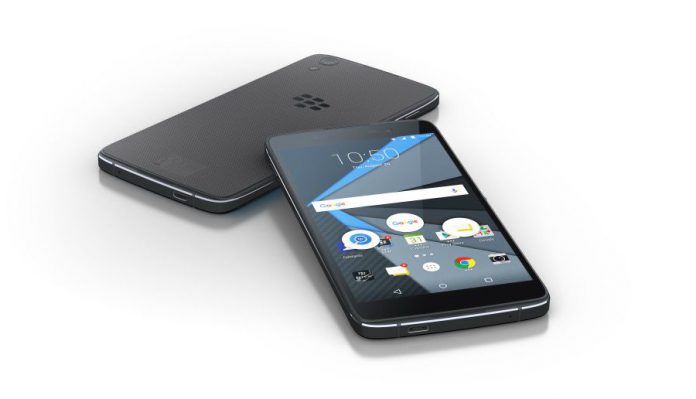 The Canadian telecommunications company BlackBerry Ltd. announced this Tuesday the official release of their new smartphone: the Android-running DTEK50, available for pre-order for $299 in selected locations.

The DTEK50 packs the world’s safest smartphone in the thinnest Android device ever developed by BlackBerry, claims the mobile security pioneer.

BlackBerry seeks to compete in the market once again, placing its latest bet on a midrange Android handset in line with their signature focus on data privacy and safety. The Ontario-based company, formerly known as RIM (Research in Motion), rolls out their second-ever Android device following the launch of the BlackBerry Priv in late 2015.

Despite not including their signature physical keyboard on the DTEK50, Blackberry’s latest smartphone still has quite a lot to offer regarding hardware.

For $299, buyers will get an all-touch screen device rocking a 5.2-inch full HD display with scratch-resistant glass. The handset features an eight-core Qualcomm Snapdragon 617 processor (1.5GHz) and 3GB of RAM.

Base device storage on the DTEK50 will be 16GB, with an expandable memory capability of up to 2TB with a microSD card.

The 135g-weighing phone has a 13-megapixel camera in the rear, while in the front it sports an 8-megapixel camera equipped with flash. A 2,610mAh non-removable lithium ion battery powers the Android Marshmallow-running device, which can reportedly stand up to 17 hours of mixed usage.

The lack of keyboard is contrasted by the addition of a unique Convenience Key, customizable to perform different functions for the commodity of the users.

BlackBerry has not forgotten about design, as the 7.4mm thick smartphone features a unique ragged back cover with the company’s logo.

The DETK50 will support nano-SIM cards from mobile carriers around the world when it starts shipping around August 8.

Like its predecessor, the BlackBerry Priv, the DTEK50 runs on Google’s mobile software, and it includes several signature apps from the Canadian phone maker.

To hold high their safety standards and make of their latest device the safest Android phone ever, BlackBerry includes some their applications pre-loaded on the new appliance.

Among the broad set of original software pieces, the DTEK app stands out. The BlackBerry-developed app is designed to provide users with a complete record of potentially unauthorized actions performed by the device.

Monitoring other applications and functions of your phone, the DTEK app will quickly report any suspicious activity to DTEK50 owners.

BlackBerry has also committed to offering a more robust Android version, while also delivering the latest security updates both from Google and themselves as soon as they are available. Furthermore, a more secure bootloader is included as well as the FIPS 140-2 full disk in-phone encryption platform.

Besides the hardened security features of the DTEK50, the handheld device is also designed for work, including Android for Work and Google Play for Work in addition to BlackBerry’s own Full Enterprise Mobility Management suite.

All labor and no play would make for a rather executive type of device, which is why the North American company also features their BlackBerry Hub for optimized functionality along with the usual set of Google’s signature apps.

That's a wrap to @BlackBerry #DTEK50 live web event. Thx to the crew and #TeamBlackBerry!! Love this team pic.twitter.com/k8SneAkEwY

A race against giants

Always praised for their thorough focus on user safety, BlackBerry went from being the official smartphone of U.S. Government officials, to being dropped as the choice device by the U.S. Senate earlier this month. The handsets used to be fairly popular even outside Washington, but with the skyrocketing ascent and success of its competitors, the American company saw itself progressively displaced on world markets.

Late efforts tried to help their cause by appealing to broader audiences with models like the BlackBerry Classic, Passport and most recently their first-ever smartphone running on Android: the BlackBerry Priv.

Released back in November last year, the Priv was met by mixed reception as it combined signature features of the Canadian company with the popular software from the tech giant Google. Despite including the beloved physical keyboard, the striking $650 price tag on the Priv did not make it exactly accessible to a large portion of consumers.

Now with the DTEK50, their latest venture on their line of Android smartphones, BlackBerry hopes to gain traction in the mainstream market once again.

The DTEK50 is an available and appealing combination of hardware and software packed in a neat record-thin device.

Demo time!! All the great features on #DTEK50 pic.twitter.com/nGsDYHtQFx

The pre-order offer for the DTEK50 includes a BlackBerry MP-12600 Mobile Power Charger valued at $60 for free, and the bundle will be available until the first shipments roll out on August 8.

While several retailers around the world are expected to carry the new Android phone by BlackBerry, it is readily available for pre-order in the U.S., Canada, U.K., France, Germany, Italy, the Netherlands and Spain.