Democratic presidential candidate Hillary Clinton got some high-profile artists to support her at her rally on Friday night. Jay-Z, Beyoncé, Chance The Rapper and Big Sean all made musical appearances at Clinton’s event at the Cleveland Wolstein Center. The election is only three days ahead.

The artists used the event as the medium to encourage voters to get to the polls on November 8. They all expressed their support for Clinton explicitly.

“I want my daughter to grow up seeing a woman lead our country and knowing that her possibilities are limitless,” Beyoncé stated.

The concert initially scheduled Jay-Z to appear alone, but news of Beyoncé also performing surfaced days after they had announced a date for the event.

Support for Clinton at the event meant explicit detriment for Donald Trump, in some cases

Chance The Rapper remarked that he was there to celebrate America’s first woman president. He praised her persistence and success but reiterated to the audience that she would need all of their help.

Big Sean raised both his middle fingers during his performance while telling the audience “You know who [these fingers] are for.” Following his line of thought, Jay-Z expressed his distaste for the Republican candidate, declaring him unfit to be his President but wishing him no ill will.

Beyoncé has been a Clinton supporter for quite some time now, famously attending one of her fundraisers in New York City last year. Jay-Z has grown fond of the Democratic candidate only recently, as the singer, had not appeared at any other of Clinton’s political events. Jay-Z’s political affiliations still grow close to Barack Obama, who has also shown his support for Clinton. 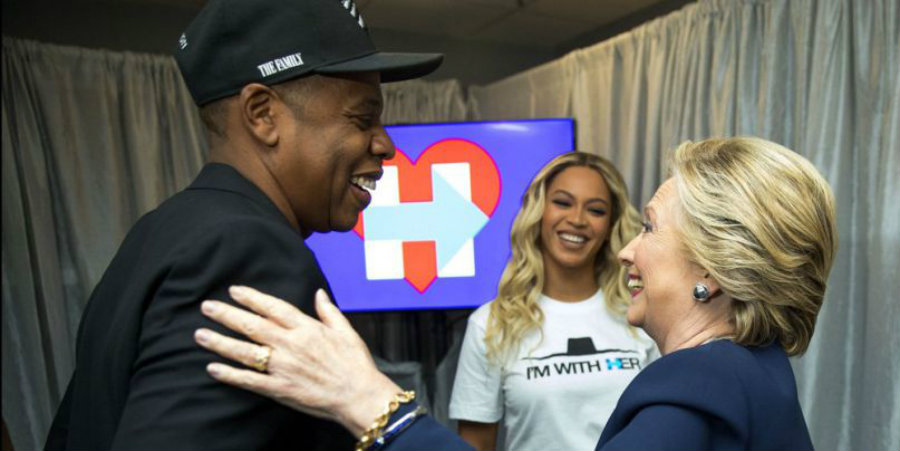 Other political celebrities currently endorsing Hillary Clinton include Katy Perry, Miley Cyrus, Marc Anthony, and Jennifer Lopez. Comedian Louis C. K. has been the last to disclose his support for the Democrat.

Trump bragged about filling a stadium without any celebrity support

“I am here all by myself. Just me. No guitar, no piano, no nothing,” Trump said at his own rally on Friday.

The Republican candidate has been backed by some artists and entertainers as well, but few have appeared with him in public.

Trump added, however, that he “didn’t need to bring J-Lo or Jay-Z” to his stage to garner an audience Friday night in Hershey, Pennsylvania. Both candidates are currently not explicitly separated in the polls. Recent statistics show that the margin of voters between both presidential candidates is in fact narrowing.