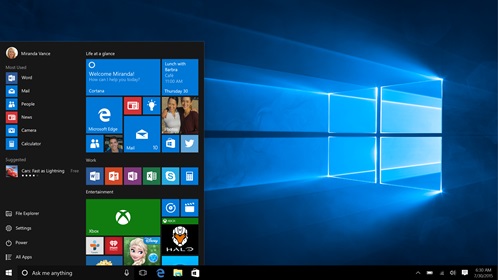 It’s been a few weeks since the official release date of the new Windows 10 and it is time to put things down and think about our first impression. The truth is, we all had been waiting for the arrival of the new and last addition of the Windows family for a long time. Was it finally worth it? Or did we raise our standards too high?

First things first, it may not be perfect for some people, but it is definitely not bad. So everyone who can download Windows 10 should do it, if you haven’t already. Windows 10 is lighter than its ancestors so it could make you old PC run a bit faster. Of course, don’t expect to get it going like when you first bought it. It’s an operating system, not a miracle worker!

Now before moving on to the big upgrade you should make sure that you’ve prepared the ground a little bit. Microsoft may have done its best to help, but there is a possibility that you will face compatibility issued, or could even lose some files. So make some space by deleting old files you don’t need anymore, and generally organize your computer like it’s cleaning day. You should also probably make a backup of every device’s driver. The closest you bring your PC to its original state the less possibilities you have to deal with problems such as driver losses.

Also try to keep up with Microsoft’s updates that are being released constantly. The company was serious after all. Frequent updates are circulating every other day. It actually makes you wonder why they didn’t wait a bit more to fix all those bugs and then release a final product without having to provide the users with numerous updates and bug fixes. So far the Microsoft has released a bunch of bug fixes and a total update (Service Release 1) that contains even more fixes.

Now to the downside of Windows 10, Microsoft has disappointed a considerable amount of customers with its indiscreetness since Windows 10 tend to mess up with many of your personal setting and preferences. They even change the browser to the company’s new “Edge”, an improved version of the internet explorer (learn how to change the browser here).

Other than that, it is quite soon to express any further pros and cons. But why wait? Upgrade now and tell us what you think about Windows 10!