Viewers can safely assume AMC is not going to cut out its main protagonist, as the sheriff’s plot armor is seemingly endless. However, some of the other characters are safe, and the answer could lay in the pages of the comics and even the trailer.

The comics and the show are not unlike as people think

Even when creators often take a different path from the source material, they still recreate main plotlines from Robert Kirkman’s iconic compendium comic.

Negan is by far the most dangerous and powerful enemy Rick and his crew have faced in both versions. The introduction of the infamous leader was the same: a group of Negan bikers ambushed some of the characters on the road, but they managed to dispatch them with heavy weapons.

Back in Alexandria, the plots follow almost similar paths. Rick tries to teach his new comrades how to survive in the harsh, post-apocalyptic world where the greatest threat are not the dead, but the living.

More so, the trailer showed Negan taking control of Alexandria’s resources and spreading fear over its community with sheer power. The plot comes straight out of “All out War” issue.

Deaths that wouldn’t make sense, according to the comics

A major season six plot is Eugene’s bullet factory. The site plays a pivotal role in the battles between the main group and Negan in the coming and is likely to do so in the TV series. Eugene is the only one who knows how to build a bullet out of scrap. He becomes an asset and, as the show already introduced the site, it is unlikely that he will die.

Carl Grimes loses the eye on both versions during Alexandria’s battle against the massive horde of walkers. The incident prompts a whole new character development for Rick’s son, as he becomes increasingly darker and angrier. AMC is probably going to explore this road.

And Michonne is one of the characters that is still alive in the comic, and she was even captured and tortured by Negan and survived. 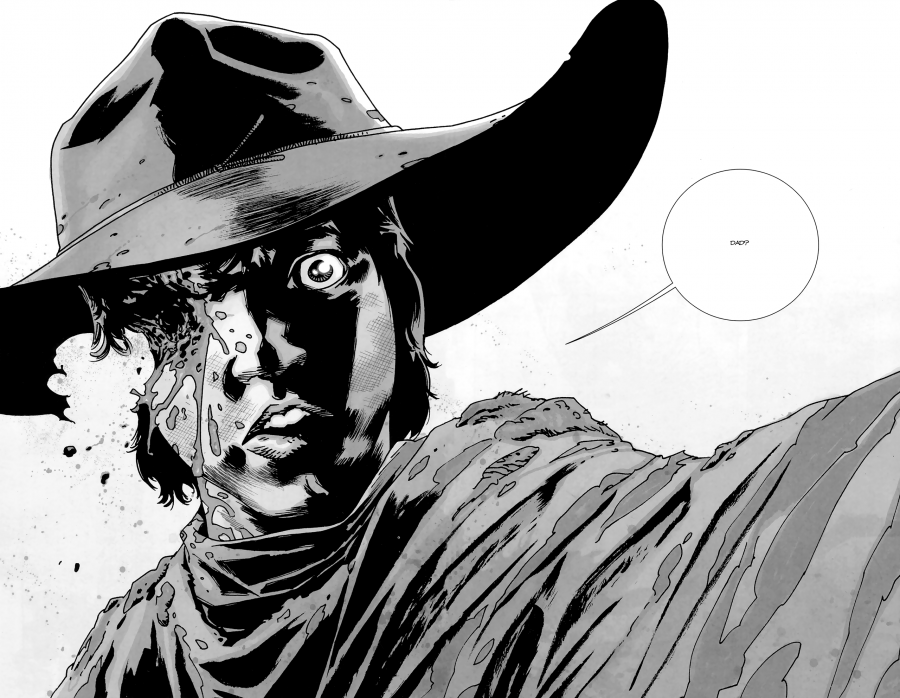 Deaths that wouldn’t make sense, according to the trailer

The trailer did not show much of the main cast, but it did introduce a new character: King Ezekiel. He, the leader of another group, develops a relationship with Michonne.  He also boasts a strong hate for Negan and is quick to collaborate with Rick against him.

It also shows one of the villagers of Hilltop village saying they should have made a deal with Negan. On the comics, the link between this settlement and Alexandria is Maggie, and she already established herself as such in season six. Likely, she will go further down this path.

This leaves Abraham, Aaron, Rosita, Sasha, Daryl, and Glenn in the danger zone. Aaron is hanging off a thin thread, as the showrunners tend quickly eliminate newcomers. And Glenn, of course, is the one who dies in the comic.