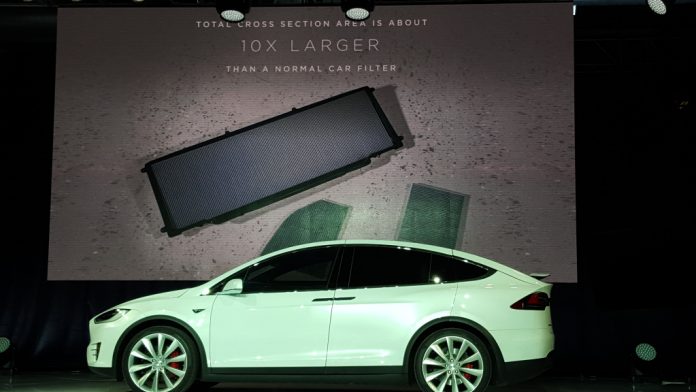 Tesla’s HEPA air filtration system, which is equipped with the Model X and the new variant of the Model S not only eliminates the air inside the vehicle but also reduces pollution outside the car as well.

In a recently conducted test, the California-based Tesla (NASDAQ – TSLA) placed a Model X SUV in a large bubble with high levels of pollution, which is approximately 8200 percent above the US Environmental Protection Agency’s “good” air quality index limit norm of 12 micrograms per cubic meter of air of fine particulate matter.

By closing the doors and integrating the “bioweapon defense mode” button, the HEPA filtration system is capable of bringing down pollution levels to a considerable level.

Moreover, the testing engineers were able to remove their gas masks and breathe fresh air while sitting in a room filled with high levels of pollution.

Also read: Tesla Model 3 Vs Chevy Bolt 2017: Which is the REAL value for money?

According to analysts, Fine particulate matter, or PM 2.5, is a blend of tiny bits and liquid droplets, which can cause grave health problems including chronic asthma, abnormal heartbeat, and unanticipated death in people with the diseases.

While bioweapons experts have been skeptical on the capability of the filter, the test conducted by Tesla might be an attempt to silence critics since HEPA air filtration system will be extremely beneficial for those people who commutes every day in heavily polluted areas like China. If implemented, the system will be useful in India as well particularly New Delhi, where there is an odd/even plan in action to curb pollution.

Tesla, meanwhile, has disclosed that it had tested the filtration system in those locations where there is a presence of poor air quality such as freeways in California in addition to China.