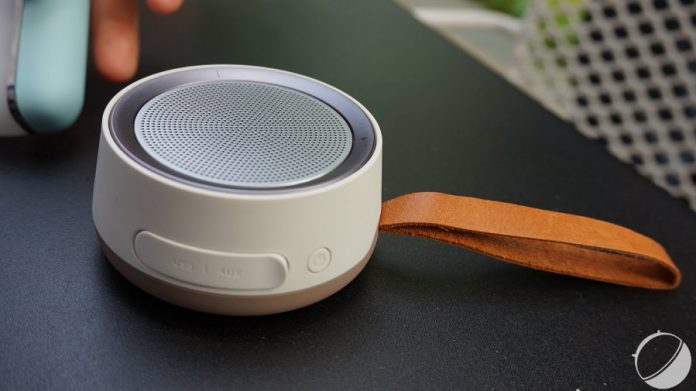 Samsung Electronics Co. Ltd. (NASDAQ: SSNLF) is planning to join the portable voice-assistant trend. The South Korean company is working on a new device called ‘Scoop‘ to compete with Amazon Echo and similar products by other competitors.

The Bluetooth-connected speaker would feature a microphone to detect voice commands, as well as a strap to make it wearable.

Although Samsung has not announced any release date, the manufacturer submitted documents including the device’s manual and design to the Federal Communications Commission (FCC) on Monday, August 22nd.

The Scoop would come with up and down volume buttons on its top, as well as a light to indicate battery life (red for ‘charging’ and blue for ‘full’).

The user must hold a power button to turn the speaker on and off, and an additional play button would also activate a Bluetooth pairing mode. On the side of the gadget, there will be a USB slot and charge port, though the charger would be sold separately, according to the manual.

The documents also contain pictures of a ‘Scoop’ a prototype

It also comes with an audio cable jack, and users could listen to music using the play button and holding the volume to skip songs. The safety section of the manual recommends using the device on locations with an ambient temperature of 0°C to 35°C.

Samsung would debut in the fast-growing smart home market

Voice-activated assistants are becoming a trend thanks to the success of products like the Amazon Echo.

Amazon released its gadget to the general public in June 2015, and since then has gained significant notoriety due to its voice interaction, music playback, and the ability to control several smart devices.

As for June 2016, Amazon Echo had an installed base of 1.6 million, according to a report from BI Intelligence, this has prompted other manufacturers to enter the smart home market.

Apple and Google are also joining the competition

Google announced a similar product called “Google Home” in May and is reportedly coming with a modular case so the user can customize the gadget with different base styles. Apple is also working on a Siri-based portable speaker, and could offer an SDK for third-party developers to expand the assistant, according to a report by The Information from May.

It is unclear at the moment if Samsung will launch ‘Scoop’ this year, or even if it’s going to develop the product at all, as the company hasn’t made any official announcements.

On the other hand, Google Home is expected to arrive over the next months, and potential buyers can subscribe to get updates of the device on its official site. As for Amazon Echo, the gadget is currently available for $179.99.