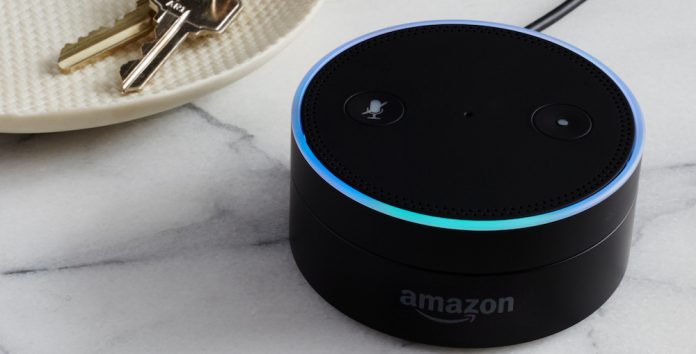 Amazon’s newest hardware product might look like a compressed version of the tall Echo speaker, but the usability that you might get out of the device at your houses is likely to be a lot different. Today the company unveiled Echo Dot, which is basically an Echo without the big speaker housing. This device will plug the puck-like device directly into another speaker or connect it to another speaker over Bluetooth, and the Dot will play music and communicate with you through there.

For those of you who are aware of how Echo looks like, the Dot will feature familiar design. It seems as if the company has just removed the top portion of the speakers and has delivered the product. It looks like a small puck and has the same ring lightening that indicates that it is listening. In addition, it has the same number of microphones on the top, that way allowing it to listen to what you are looking to communicate with it. Like the big Echo, it needs an external power supply to run.

The working of the device is quite same, other than the fact that it now houses more powerful speakers. All you need to do is ask the virtual assistant, Alexa, a question and it will respond accordingly.

Moreover, it is worth adding that the Echo Dot does have a small speaker for applications like alarm clocks, timers etc, however, it is quite clear that you can’t expect to use this device for blaring out loud music. Amazon, at a press event in San Francisco yesterday, even had the Dot attached to a $2,500 Bang & Olufsen speaker which further cements this notion.

The main idea behind this device is to bring Alexa to several different parts of the house. It will go on sale today for $89.99, which is not exactly cheap, though it is definitely a drop from $179.99 that Echo sells for. If you are interested into purchasing the Echo Dot, you will have to order through Alexa, so if you don’t have a Fire TV or an Echo, you will not be able to order.