Fans of AMC’s hit series The Walking Dead have been following the protagonist Rick Grimes since the first episode. TWD’s first season starts with Rick waking up in a hospital after he was in a coma for months. At a hospital in Atlanta, Ricks struggles to accept his new reality in a post-apocalyptic set-up filled with zombies, or walkers.

Rick Grimes has grown from an honest, kind man, to a ruthless leader who doesn’t believe in second chances. The sixth season of the series introduces many enemies, aside from the walking rotters. Amongst the survivors fighting for resources in the show, Negan is by far the most mysterious one.

On the season finale, Rick Grimes, and his group finds themselves trapped by Negan and his many gang members, with the guarantee that one of them will be beaten to death in front of the others. A teeth-shattering sneak-peek preview of The Walking Dead’s season 7 premiere shows how Negan killed one Rick’s crew. Nonetheless, the set-up for the next season could bring some unexpected changes to the plot, as comic readers know.

The Walking Dead’s graphic novel shows how Glenn gets chosen by Negan and is in fact, beaten to death with a bat covered in the metal wiring. Nonetheless, the show has managed to get some things straight out of the comic and twist some other stories in the plot.

Daryl Dixon is second in command of Rick’s crew

He’s been there for Rick since season one, and they have trusted each other in the face of peril. He is Rick’s right hand at the moment, and he was sitting on his right side when Negan was about to punish the group. Negan was very subtle about his intentions. “What do you have without a right hand? A whole lot of work,” he said. “Do you have one? Maybe one of these people still breathing?” There’s a bloody poncho on the ground, and Daryl was wearing one because he was wounded.

“What do you have without a right hand? A whole lot of work,” he said. “Do you have one? Maybe one of these people still breathing?” There’s a bloody poncho on the ground, and Daryl was wearing one because he was wounded.

“WHAT DO WE HAVE WITHOUT A RIGHT HAND? A WHOLE LOT OF WORK,” Negan says while chatting with Rick’s group. “DO YOU HAVE ONE? MAYBE ONE OF THESE PEOPLE STILL BREATHING”

Glenn could be seen as third in command, considering he has been alongside Rick since season one. Given that showrunners wrote a meaningful subplot for both Glenn and Maggie, he is still hanging by a thin thread. It would be just the right moment to say goodbye to Glenn and leave both audiences and Maggie with a broken heart.

Either way, if Glenn gets out alive, he will have too much on his table to take care of the leader of the crew.

It would be hard to think that either Abraham, Eugene or Aaron could fill the role. There is no real connection between these characters and the protagonist of the show. Likewise, Carl Grimes is injured and also needs special care. 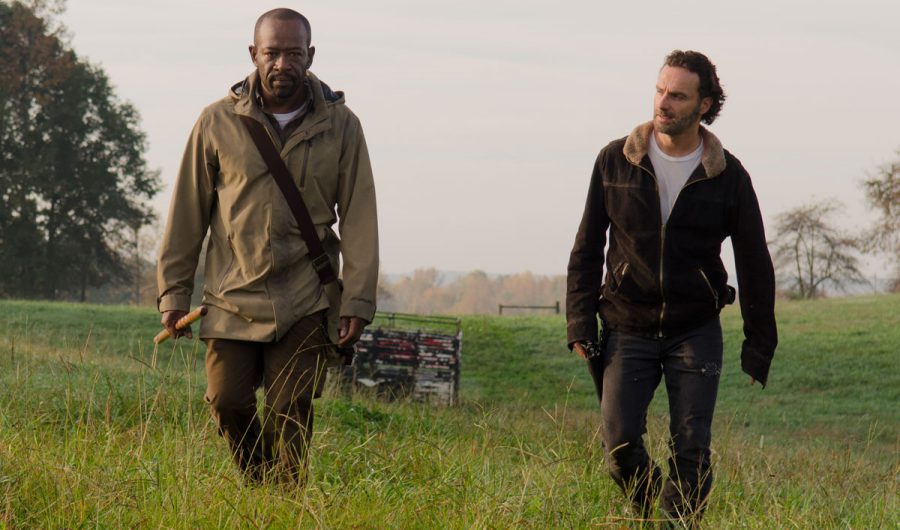 The path to ruthless and back: Morgan’s real role

There has always been a recurring debate on the show: diplomacy versus violence.  Rick grows from a person who prefers to talk and negotiate (as fans saw in season’s one “Vatos”) to a ruthless leader who has no trouble to kill for resources.

From Shane’s betrayal to The Governor’s revenge, Rick has become a ruthless leader, and only one character is trying to push him back to mercy, compassion and understanding.

Season six reintroduced Morgan and hinted he would become a pivotal character. But he did not, and showrunners are in debt. Writers might deliver on the upcoming season. Negan is going to show the crew the actual meaning of violence and force them out of the expensive ways of savagery. Morgan might become both Rick’s right hand and his path back to humanity.