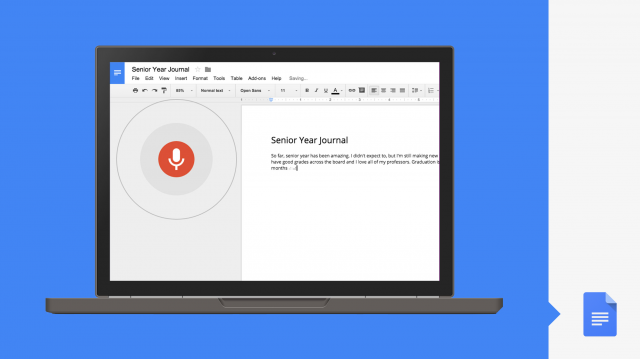 Google Doc has come up with a new trick, Voice typing, which is the ability to recognize words and commands spoken through a desktop computer’s microphone.

Starting Wednesday, everyone who uses Google Docs via Chrome on computers can edit and format documents by voice. Voice Transcription, which is the lesser version of this capability, has been available since last September, but it lacked editing or formatting functions.

The Google Docs app on the Android and iOS platforms has the Voice Transcription feature, which can be used by tapping the microphone icon on virtual keyboards. But like Voice Transcription, mobile Docs doesn’t provide support for editing and formatting commands.

“As an added bonus, we’re also making it possible to dictate in Docs on the Web in dozens of additional dialects and accents, including English with an Indian accent, Spanish with a Mexican accent, and more so you can talk in the most natural way to you,” said product manager Isaiah Greene in a blog post

To activate the feature, all you need to do is select the “Voice typing” from the Tools menu in Google Docs. After that, a popup microphone window should appear. To tell Google to listen, click the microphone popup or press Ctrl + Shift + S (Cmd + Shift + S on a Mac) on the keyboard. Then just speak without hesitation to edit or write into the doc.

Talking of the Voice Recognition feature, last year a celebration had taken place in the company due to he impact deep learning has had on the voice transcription technology in Google Voice. By using the data that users of the service shared in the form of voicemail audio files, they were able to reduce the  transcription errors by 49%. The same technology is behind the latest feature on the Google Docs.