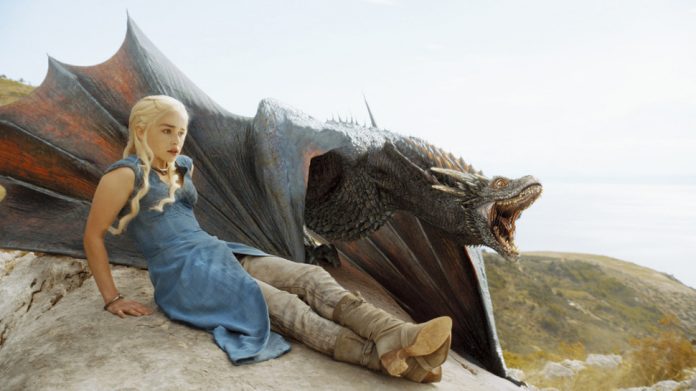 The creative team had to take inspiration from real reptiles and creatures as there was no reference for dragons in real life. The team ended up using textures and images from different lizards, aligators, snakes etc.

No, not really, as according to the Game of Thrones production team, it was the most cost-effective and safe way to create the scenes.

Real fire was produced using robotics that were completely predictable, that way making shooting the scenes easier and also provided the CGI dragon with some organic looking fire.

Also read: Which Game of Thrones characters will die in Season 6 Episode 4?

What about the dragon’s structure?

Well, Pixomondo based it on a chicken. No, really, the designers ended up using a Raw chicken from a grocery store to establish the basic structure of the dragons for the first time. Obviously, they later used clay modelling softwares, like Zbrush to create the final product.

What about Dragon’s flying skills?

The flying skills of Khaleesi’s dragons were not adopted from one single animal, but in fact two. The Eagle and The Bat.

When the dragons take flight off the ground, you can very well notice that their movement mimics that of The Bat. And when Dragon is soaring through the air at high speeds, its inspiration seems to be The Eagle.

Designers had to tweak and change flight patterns according to the creature’s size and wing-span, but the basic inspiration was The Bat and The Eagle.

What about the Indian Company that supposedly created the Dragons?

This claim seems to have no substantial proof to it. Prana Studios, a team specialising in VFx and Animation, based in Mumbai with branches in L.A, was rumoured to be the company that created these dragons.

Though, upon visiting the studio’s website, you will find that nowhere do they have HBO as their client, nor do they have Game of Thrones under their list of projects that the Studio has worked on.

Many blogs published news stories that explicitly stated that Prana Studios, known for VFX and Animation in various projects around the world, was responsible for creating the Dragons of Game of Thrones. Even Times of India stated the same in one of their stories.

Whatever be the case, the Dragons ultimately do look scary and very realistic on screen, and therefore it is a fact that Pixomondo did a tremendous job.

And now you know how Drogon, Rhaegal and Viserion came to life. Feel free to share your views below.