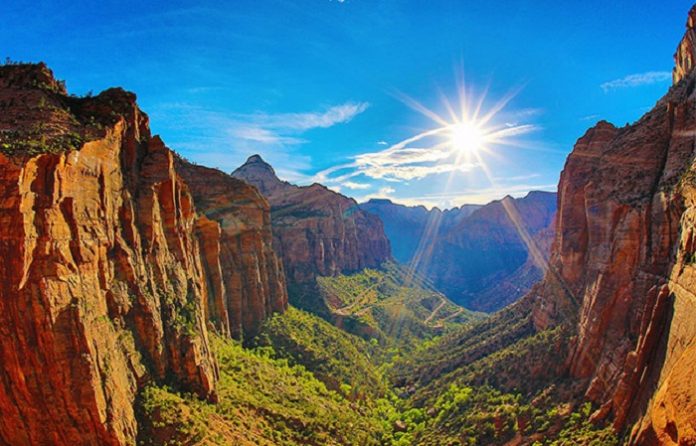 The Zion National Park that is snuggled in Utah, the United States, features a gorge formation which is often referred as the Sentinel along the western wall of the Zion Canyon.

A new research paper claims that the sweeping dale in Utah with a river cutting through the center was created by a landslide of gargantuan proportion.

The theory was first propounded in 1945, but it is now that researchers have been able to gather substantial proof. The researchers first analyzed Sentinel Mountain, determining the volume of the mudslide.

They then measured the quantities of beryllium-10 in surface rock and then putting the data in modeling systems to see the final result.

Researchers found that a large mudslide rolled at more than 200 mph, and the Zion valley was formed in less than a minute. The incident happened some 4,800 years ago making the valley much younger than presumed.

The gigantic mud avalanche also created a lake which remained in existence for more than 700 years. The valley floor which is today covered with sediments was once a huge lake.

The amount of debris deposited by the landslide was massive in the order of 10 billion cubic feet of sandstone. The event obstructed the Virgin River, and it created the two-mile lake. When the lake dried up, the sedimentation emerged and created what we now call the Sentinel sandstone formation.

This catastrophic landslide of colossal proportions had a beneficial effect and created a paradise through destruction. The flat and tranquil valley of the canyon has been enamoring visitors for years now.

However, there is a fear of what will happen if such a landslide was to happen again and in some mother populated area? However, experts opine that the likelihood of a slide of such grand scale taking place in present times remains very slim.