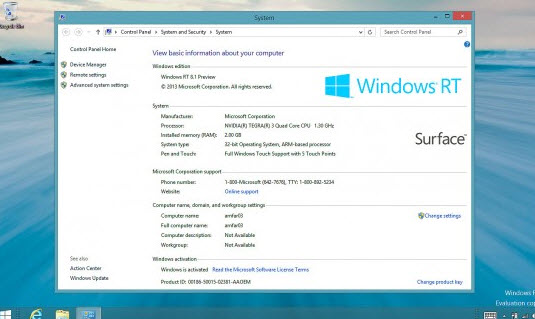 US – Microsoft (NASDAQ: MSFT) spokesperson confirmed that the Windows 8.1 RT update will not support Universal Windows apps. Windows 10 has already been developed. Now the company is bringing Universal Apps. This means that once the app is developed by the developers; it can target thousands of users who are running Windows 10 on their tablets, phones, desktop, computer or an Xbox One. In the coming months, Microsoft will update Windows 8.1 RT with some features. These features will include updating the start menu and lock screen of their devices. However, these updates will not work with Universal Windows apps for Windows 10. Windows RT devices running on the older operating systems will be able to purchase, download and run the apps from Windows Store. But new apps will not be available for them.

A spokesperson for Microsoft has confirmed to ZDNet that Windows 8.1 RT update 3 won’t have support for new Windows 10 Universal apps; even though these apps are designed to run on both x86 and ARM-based chips for smartphones and small tablets.

“Surface (RT, Surface 2 and third-party ARM-based Windows PCs and tablets) only run apps built for RT and not Universal Windows Apps. There are lots of apps that work on RT, so they’ll be able to continue to enjoy apps, games, music and movie content,” the spokesperson said.