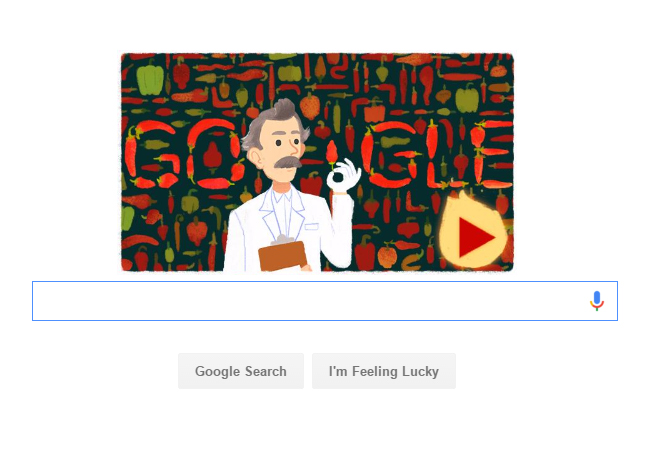 Today Google honors Professor Scoville’s 151st birthday with his own doodle. The truth is that he would probably be very surprised to learn that in 2016 he is primarily remembered for his research into spicy peppers — the namesake of the Scoville heat units. Born in Bridgeport, Connecticut, in 1865, Scoville was a pharmacist. He did his practical work in the laboratories of the pharmaceutical company Parke-Davis, which in its day was America’s largest drug maker.

The spiciness of chilli peppers is measured using the Scoville scale and test and was invented by Prof Scoville in 1912. The Scoville Organoleptic Test answers this specific question: How many equal parts of sugar water are needed to add to a ground chilli pepper until no distinguishable heat can be tasted? The spiciness of each pepper is measured in Scoville heat units (SHU) which represent the equal parts of water needed to prevent someone tasting the heat.

Scoville’s method was to dry out peppers and then dissolve a specific weight of dried pepper in oil, thus extracting the flavorful compounds. The extract was then diluted in sugar water and given to a panel of five tasters. The amount of sugar needed to make the spiciness undetectable to a majority of tasters determines the Scoville rating of the pepper.

First discovered in 1816, the ingredient producing spiciness in chilli peppers is a compound called Capsaicin. The burning sensation capsaicin induces in the mouth leads the body to produce endorphins as a countermeasure. Eat spicy food regularly enough, and you start to associate the pain of pepper with the endorphins’ pleasant rush. Pure capsaicin has a Scoville rating of 16 million SHU. Since 2013, the hottest pepper in the world has been the Carolina reaper. This variety was created by South Carolina chilli farmer, Ed Currie, and achieved 2.2 million SHU.

Since 2013, the hottest pepper in the world has been the Carolina reaper. This variety was created by South Carolina chilli farmer, Ed Currie, and achieved a whopping 2.2 million SHU.