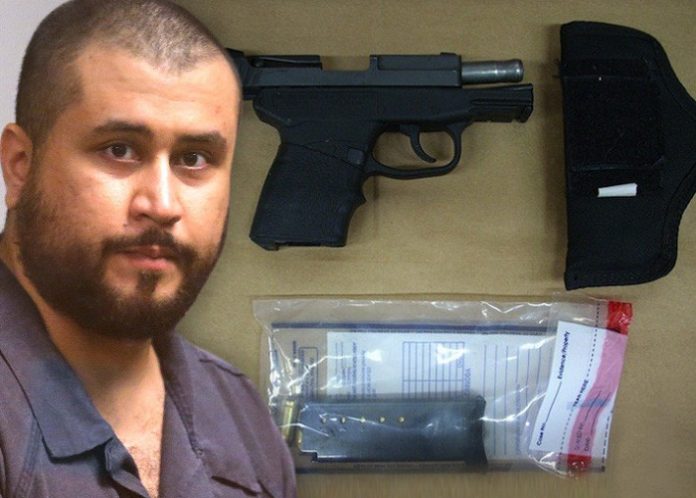 George Zimmerman is selling the gun he used to shoot Trayvon Martin on February 26, 2012, via auction. Listed as Kel-Tec PF-9 9mm on Gunbroker.com, the listing clearly confirms that it is the same gun used by Zimmerman on 2/26/2012. The auction will take place at 11 AM ET on May 12.

In the auction page, he had revealed that he is selling the gun which is returned by the Department of Justice. Written using a silver permanent marker, the pistol has the case number written on it.

He further revealed that The Smithsonian Museum in Washington DC expressed an interest in owning the firearm but he declined to give it to them. Moreover, the pistol has been featured in several publications and in University textbooks as well.

Disclosing that the firearm is fully functional, Zimmerman states that he is auctioning the item since he is not satisfied with the offers received so far.

The untimely death of Martin sparked widespread protest and created a kind of unrest in the US. Martin, a 17-year old resident based in Florida was returning to his home from a mall when Zimmerman chased him without any provocation.

When Martin began to see that Zimmerman is chasing him for no reason, he stopped and had a fight with him, which led to shooting and death of the boy.

However, a local court had cleared Zimmerman of all charges, which further led to massive protests and rallies by various human rights organizations against the brute police force.

Zimmerman had another version of the story in which he says that he used the gun to defend his life from the brutal attack from Martin on that unfortunate day.

According to human rights activists, Zimmerman’s acquittal shows the sad face of US laws related to the use of guns. They also strongly protested against the huge racial injustice provided to the parents of Martin.

Before the court, Zimmerman’s lawyers argued that Martin punched his client, slammed his head into the pavement in a bid to steal his pistol.

Dismissing the revelations as baseless, the prosecution demanded maximum penalty but the judge cleared him of all charges. Martin’s parents were unavailable for comments and said that they would not comment on the actions of the person who killed their son.

After Martin’s death, a group of activists formed Trayvon Martin Foundation, which is committed to ending the violence revolving around the gun in both public places and schools in the United States.