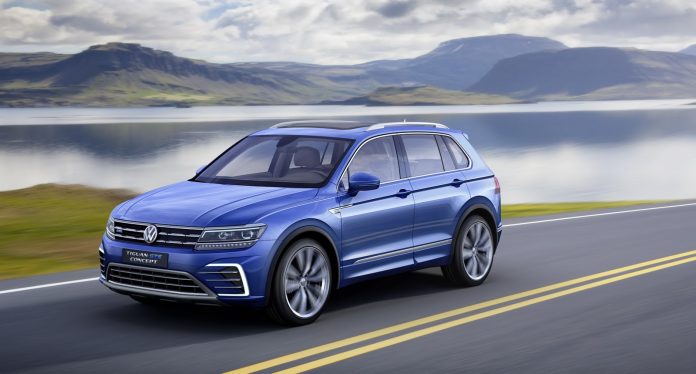 This year’s Detroit Auto show is full of enthusiasts who have been anticipating crossover and plug-in hybrid cars. In response to this anticipation, Volkswagen has brought the Tiguan GTE Active concept to the show. The hybrid car is a beefed-up version and is off-road capable. It wears large off-road tyres, new aluminum panels on the undersides of the front and rear bumpers for added protection, more rugged cladding and a ride height increase of 1.7ins, which all indicative towards the offroad orientation of the car.

Under the bonnet, the car is powered by the plug-in petrol/electric hybrid powertrain that was originally seen in the Golf GTE. This engine supports four wheel drive as it is capable of powering the front and rear axles independently, or both at the same time. The orientation can be set easily by adjusting the different mode options that are given to the driver. Off-road and sports modes are also added to the car controls.

As for the power, the engine delivers 218bhp power and, according to the claim by Volkswagen, the car can do 0-62mph in 6.4 seconds. It is a four cylinder turbocharged gasoline-powered engine, that can knock out 48 horsepower and 184 pound-feet of torque. With fully charged battery and a full tank having 16.9 litres capacity, the car can run for an expected range that is 580 miles.

Also read: Volkswagen unveils the Electric Microbus: The future of VW is here

The car, when running on electric power alone, can achieve an electric range of 20 miles, though, at present, Volkswagen has said that their main aim for showing the concept was to display the extreme off-road capabilities of the car, not just its hybrid powertrain technology.

As for the interiors, it is very boldly designed and is not at all mainstream. An infotainment system that features a 9.2-inch wide display has been added too, sporting a gesture-based control system. All the included instruments are digital and the system can be connected to your smartphone via Apple CarPlay, Android Auto, or MirrorLink by using App-Connect.

Small yet important gimmicks like the auxiliary headlamps and roof rails all cement the off-road capabilities of the vehicle.

Do note that the concept is based off the all-new Tiguan that is set to arrive in the United States in 2017.

What do you think of the forthcoming VW Tiguan and the rest cars presented at the Detroit Auto Show 2016? Let us know in the comments below.