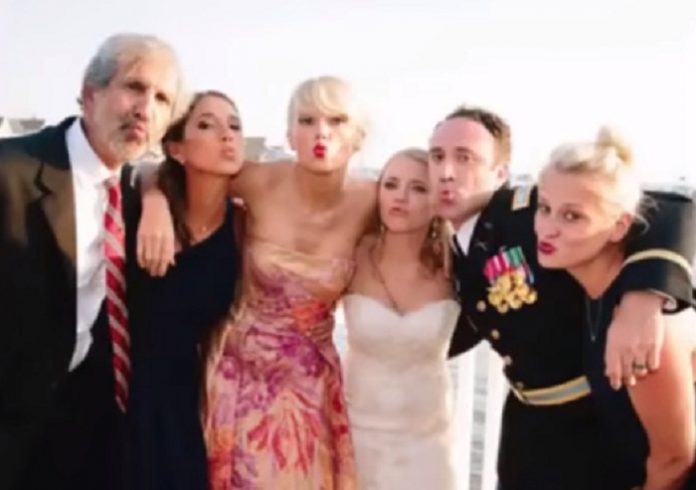 It seems that Taylor Swift has started a new career as a wedding crasher. On Saturday, June 04, 2016, the singer surprised everybody by crashing into the Brant Beach Yacht Club where the wedding ceremony of Max Singer and Kenya Smith was going on.

Pictures of Taylor Swift along with the newly wed couples soon went viral on social media, and her fans started celebrating the surprising act of their favorite celebrity.

Max Singer’s sister Ali was primarily responsible for Swift’s appearance on the wedding eve. After the death of their mother, Ali wrote a letter to Swift telling about Max’s legal marriage at the hospital as their mother could not attend the event.

The groom is a die hard fan of Taylor, and this compelled Ali to write a letter to the star. After reading the letter, Swift contacted Ali, and the duo decided to give the groom a surprise.

The news touched Swift’s heart, and she decided to attend the ceremony. The ravishing beauty attended the event with just a keyboard and microphone, and she even performed for some minutes during the event.

Taylor Swift also bought a special handmade wedding gift for the couple. She presented Max and Kenya a hand-painted floral circle which was embedded with the lyrics of “Blank Space”.

After the event, Max told that he has no idea that his celebrity idol will attend the auspicious event. After seeing Swift, Max behaved like a 10-year-old boy, and it literally spread a wave of happiness among the guests.

This gentle act from Taylor has been well received by the audiences, and everyone are praising the “Shake It Off” singer for her kind mind.