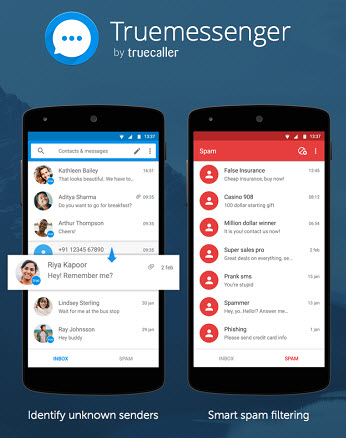 You had blocked spam phone calls before, now you can block spam messages too. Truecaller has launched a new app called Truemessenger that helps users to block spam messages and stay safe. Truecaller remains as one of the most downloaded apsp across the globe because of well known feature of providing the ability to identify the unknown numbers and block spam calls.

Truemessenger control spams messages by identifying numbers in the SMS inbox. Currently this app is only available in India, but in few weeks it will be available for download in other global market as well.

Here is what Kari Krishnamurthy, Truecaller India head, said about it:

“Truecaller identifies 900 million calls a month and one in seven calls are spam. We are looking to provide the same experience in texts with the new Truemessenger app,”

There are around 80 million users in India that are using Truecaller to identify unknown numbers on their cell phones. This figure is set to exceed to 150 million when Truecaller goes globally. Although, Truecaller has  partnership with top telecolm companies like Airtel, Tata Docomo, Gionee, Obi, Celkon, Micromax, Microsoft, and Cyanogen and it is planning to get into an agreement with more telecolm players to increase its customer base and revenue.

At the launching event of the Truemessenger app, Alan Mamedi, CEO and co-founder of Truecaller, said:

“Today’s messaging apps are under constant attack from spammers and surrounded by uncertainty, but when we communicate via email for instance, our email app shows you the sender’s name and filters out spam messages for you, but SMS has lacked these essential components – until today. With Truemessenger we’ve re-imagined the SMS app experience by making it more social and putting control back into the users’ hands so they always know who they are communicating with,”

Truecaller has two more apps in the market other than Truemessenger. These are Truecaller and Truedialler. Before download, one should keep in mind that Truemessenger is only available for Android users right now.