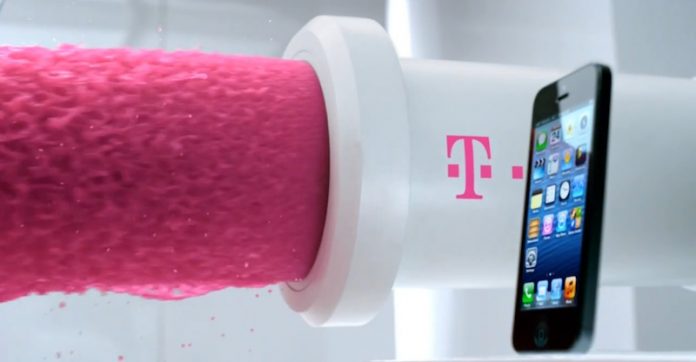 This is the second time during the past few weeks that Apple (NASDAQ: AAPL) breaks into the news with an issue on its products.

Reports starting this morning claim that a variety of iPhone owners that are subscribed to T-Mobile’s network are finding difficulties whilst using their handsets. More specifically, the issue is similar to the ‘blue screen of death‘ found in Windows usually when a driver fails to operate properly. In today’s occasion, the device’s screen goes blue – the shade of blue when the device shuts down – and then it reboots. The problem reappears in a timeframe of ten to thirty minutes.

This is one of the original reports referring to the issue:

“Hey guys. So this morning my iPhone 6 (4 months old) started just randomly restarting itself every 20-30 minutes or so. I wasn’t even using it most of the time, it was in my pocket at work (could tell because of lock screen that indicated I needed to enter my pin after a restart as opposed to finger ID). At one point I was texting my SO about it, the screen turned blue for maybe 2 seconds and it restarted.”

The issue is obviously carrier-sourced since it is solely happening to T-Mobile customers. A lot of users suggest that the problem can be temporarily addressed by turning off WiFi calling. Others have picked the hard way and fully restored their handsets, an option that doesn’t work 100% of the times though if you just go for it make sure to backup your files.

We do not have exact info regarding which specific versions of iOS the issue affects though, according to USA Today, up until know all iPhone owners that have gone through such an ordeal were using an iOS 8 iPhone.

The renowned carrier has not made any official statement yet regarding the chaos that is currently taking place. A number of subscribers that have gotten in touch with T-Mobile’s tech support mentioned that technicians believe the issue has to do with memory. Moreover, there is no word yet about possible carrier update that may be the culprit of the crime.