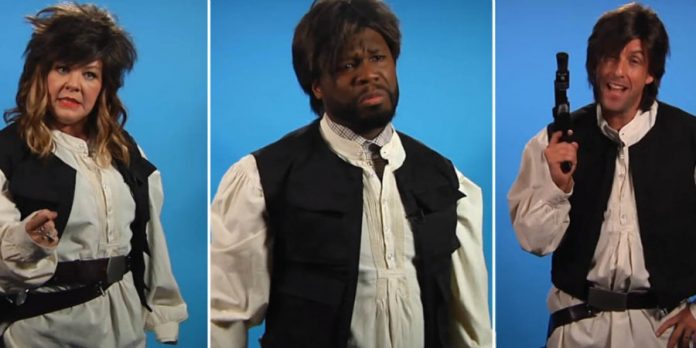 Han Solo, the beloved captain of the Millennium Falcon is set with his own prequel spinoff series. He will be played by newcomer actor Alden Ehrenreich, who had to overcome several A-list performers in the casting and now has full endorsement from Disney. The American 26-year old actor is known for his portray as Hobie Doyle from “Hail, Caesar!” comedy short film.

The short runner-up list included Taron Egerton, last year’s Kingsman: The Secret Service star. Jack Reynor, with a list of credits that includes Transformers: Age of Extinction and What Richard Did, and Whiplash’s Milles Teller.

Another audition for the role occurred on the Conan O’Brien show, and it may be the only sneak peek we get to see the real deal. Not your typical Han Solo’s in this star-studded clip were even Melissa McCarthy and “Jodie Fu*ing Foster” made their impressions of the renegade space traveler.

Jeff Goldblum, Adam Sandler, Will Arnett and 50 Cent auditions also were “unearthed” by Conan. Oh, Bill Hader made his own impressions of young Jabba the Hutt, in case the slug crime lord is included in the prequel.

The expanded universe outside the 7 released films are not canon, so all is known of Han Solo is what we’ve seen in the theaters. Spoiler alert. He died in The Force Awakens, killed by his troubled son, Ben Solo.

Ben is fathered by Leia Organa and Han Solo, and is the sith apprentice Kylo Ren, a Darth Vader copy-cat lured to the dark side by the First Order supreme leader, Snoke.

Solo was introduced in A New Hope, Star Wars’ first film in 1977, when he and his co-pilot Chewbacca accepted a request to transport Luke Skywalker, Obi-Wan Kenobi, R2-D2 and C-3PO to Alderaan aboard the Millennium Falcon.

The final night of #CONAN at #ComicCon begins now on @TBSNetwork #ConanCon pic.twitter.com/OzOjynUu2U

Later, the ship is captured by the Galactic Empire, and Han and company avoided detection inside Falcon’s smuggling bays and infiltrated the station disguised as Stormtroopers.Then they managed to rescue Princess Leia Organa.

During the final battle scene, Han Solo made a heroic entrance that saved Luke’s live and enables him to destroy the Death Star.  Onwards,  Harrison Ford’s character becomes an important companion of the last Jedi alive in his quest to overthrow the Empire and restore balance to the force.

However, according to New York Daily sources, Han’s early adventures will be divided into three films, with stories potentially growing away the plot of Empire Vs Rebels and Jedis Vs Sith.

So far, it has been revealed that the spinoff will include an origins story for Chewbacca and that, according to The Force Awakens concept artist, it has “by far the best Star Wars script”. The script is in the hands of “Empire Strikes Back” and “Return of the Jedi” writer, Lawrence Kasdan.

The first one is expected in May 2018. Luckily, Star Wars fans will be seeing “Rogue One” in cinemas later this year.