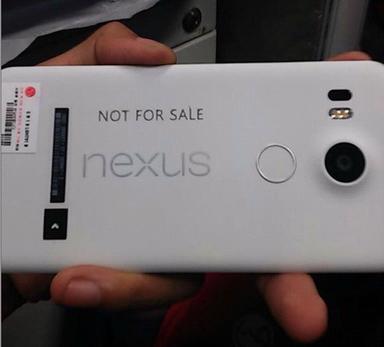 There are few major smartphones left to be announced in 2015. Among the most anticipated ones is the Google Nexus 5 (2015). Well known tech reviewer Marcus Brownlee, tweeted a photo of the rear side of new Google Nexus 5. The photo looks like an authentic piece, a “Not for Sale” warning on the back and with complete Nexus branding. Just below the camera module, one can see the disk shaped finger-print sensor with metal ring, hinting that the Nexus 5 (2015) phone will too have biometric technology.

Google rigorously sticks to the annual release cycle. Nexus 5 first version graced the world back in October 2013 and Nexus 5 (2015) is expected to release in October this year. First of its kind, Nexus 5 (2015) is expected to have a 5.2-inch display and measures 146.9mm long, 72.9mm wide and 8.0mm thick. It is supposed to have a rectangular candy bar body with slim edge and glossy metal-based frame around it. One can also see the micro USB port (probably Type C USB) with audio jack at the bottom, whereas the power and volume rockers are placed on the left side of the edge.

Nexus5 (2013) had a 2300 mAhbattery, that was one of the serious gripe. However, the Nexus 5 (2015) battery is believed to be getting a bump up to 2700 mAh battery. On the rear-side, it is shown to exhibit plastic based polycarbonate shell with a dual-LED flash, laser based auto-focus and a circular protruding camera.

It goes without saying that the Google Nexus 5 (2015) will be a more powerful and objectively ‘better’ phone than the earlier version of Nexus 5. The only question arises, will it be able to make a great impression as Nexus 5 did in when it was first launched!