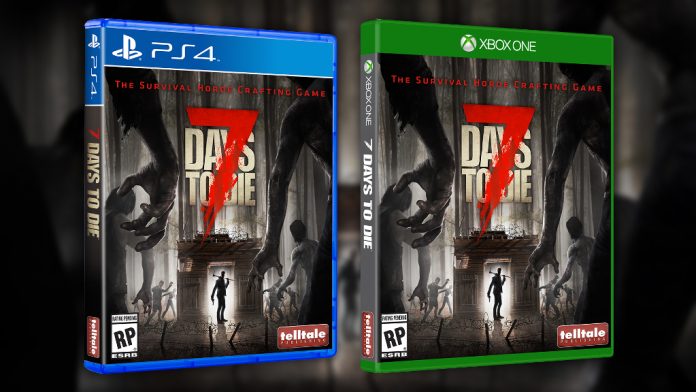 Telltale Games video games developer released the demo of one of its upcoming titles, dubbed ‘7 Days to Die’, which is yet another zombie-based offering, expected to arrive in summer 2016 for Xbox One and PlayStation 4.

The developer is primarily known for the spin-offs it has created, including ‘Back to the Future’ game, two Walking Dead titles and much more.

Moreover, ‘7 Days to Die’ comes as an addition to its zombie line-up, while the existing titles, ‘TWD: Michonne’ and ‘The Walking Dead’, have already managed to attain a substantial fan-base — a large proportion of which come from the respective graphic novels and TV series.

Telltale unveiled a few key points regarding the video game’s content and gameplay in a blog post:

Set in a brutally unforgiving post-apocalyptic world overrun by the undead, ‘7 Days to Die‘ is an open-world survival game that is a unique combination of first person shooter, survival horror, tower defense, and role-playing games. It presents combat, crafting, looting, mining, exploration, and character growth, in a way that has seen a rapturous response from fans worldwide, generating hundreds of thousands of hours of community content on YouTube and other streaming video platforms.

Relying on the quality of the previous zombie-infested titles, we are quite confident that ‘7 Days to Die’ will deliver an equally solid experience as well, making users have a blast in front of their screens for hours.

Furthermore, it is worth adding that, despite having developed great zombie titles in the past, Telltale has clarified that the particular video game will differ from the other two, as it will feature unprecedented elements, like combat, crafting, looting and the rest of the aforementioned.

On a less relevant note, judging from the blog post’s comments, users appear to be impressed with Telltale’s work.

More specifically, one user said: “Does this contribute to the “biggest year for fans of the undead”? 😀 I’ll definitely pick this up, especially because of the skins”

What are your thoughts on ‘7 Days to Die’? Let us know in the comments below.