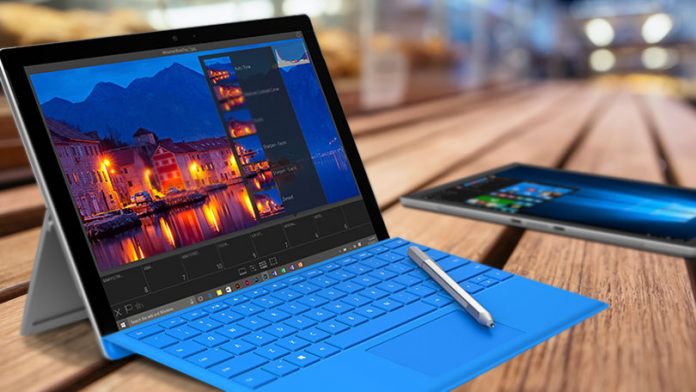 Microsoft Surface Pro 4 is a high-end premium device, which enables you to work like both a tablet and a laptop, accompanied by an optional type cover keyboard. The device is meant for IT professionals who travel a lot and also for hardcore programmers.

Microsoft Surface Pro 4 ships with a wide range of powerful processors like Intel Core m3, Core i5 and Core i7, coupled with up to 256GB of internal storage space starting from 128GB.

The devices are available in 4 GB, 8GB, and 16GB RAM capacities. If you are a developer or a graphics designer, you need to buy 16GB device, since it provides maximum speed to work with various software like Visual Studio. The Surface Pro 4 is designed in such a way to enable it to run cooler.

Coming to other technical specifications, the Surface Pro 4 is equipped with a 12.3-inch PixelSense touchscreen display with a resolution of 2736 x 1824 pixels. Moreover, Microsoft has also included a Surface Pen to enable users to easily interact with the device.

Loaded with Windows 10 Professional, which is higher than home edition, included with conventional 2-in-1’s, the Surface Pro 4 is capable of running advanced tools like Adobe Creative Cloud, Citrix, and AutoCAD.

There are rumors floating around the web regarding the upcoming Surface Pro 5, which will be released by the end of November 2016. However, there is a possibility for the Redmond-based company to announce the device before the end of June.

Microsoft will also likely introduce a patented Surface Pen with a rechargeable battery and a magnetic dock on the top of the device.

Surface Pro 5 to come with a larger screen and higher price?

In all probability, Microsoft will upgrade the display to up to 14-inch, followed by a steep increase in the price. If Microsoft decides to maintain the same display size, then you can expect a brighter and sharper display.

You can also expect an improved firmware, which is capable of delivering a backup of over 9 hours. It is also possible to expect a fast charging USB Type-C port in the upcoming Surface Pro 5.

On the specifications front, the new Surface Pro 5 will be equipped with the same 12.3-inch display, up to 6GB RAM, up to 500GB internal storage, in addition to an enhanced camera. There are rumors that Microsoft will increase the display size, although not yet confirmed.

Regarding pricing, Microsoft Surface Pro 5 will be available at a base price of $599 with up to a maximum of $1599 for premium models with higher RAM and disk space.

If you want to buy a new Surface Pro, then it is better to wait for some more time till Microsoft officially launches the new device. Moreover, the price of the existing Surface Pro 4 will most likely face a substantial drop sometime in January 2017.