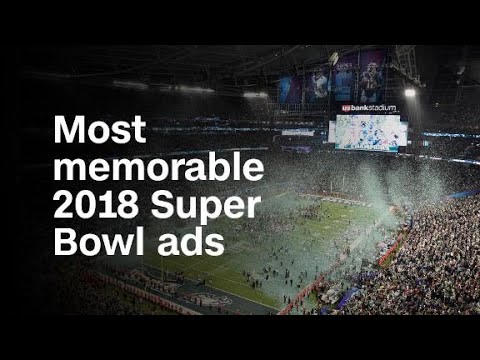 The Super Bowl is the main sports event of the season every time it comes around, as it brings amazing half-time performances, polemic or fun commercials featuring big stars and icons, amazing shows and technology. Of course, the big game tops it all off, but it’s not all about football.

This year’s Super Bowl LII ads were completely different in comparison to last year’s. Many believe that the more political things get the flatter the ratings go. For example, the Grammy’s low ratings had a direct link to Hilary Clinton reading Donald Trump’s biography.

In the words of Andy Goeler, marketing executive for Bud Light “Delivering something just light-hearted and fun is the root of what beer is all about.” With the exception of a few controversial ads, the show was packed with iconic pieces throughout the Eagles’ victory over the Patriots. Let’s check some of them out.

Doritos: a rap battle of “ice and fire”

A brilliant reference to the Game of Thrones title “A song of ice and fire”, this double ad features Peter Dinklage and Morgan Freeman in a lip sync battle between House Doritos Blaze and House Mountain Dew Ice.

Amazon aired a short 90-second video featuring Jeff Bezos in a dire situation in which Alexa has lost her voice, so celebrities Rebel Wilson, Gordon Ramsey, Cardi B and Anthony Hopkins will provide assistance and subbing for Amazon’s voice assistant.

The first commercial to appear at halftime this year was Toyota’s start your impossible ad featuring the real-life journey of 8 times Paralympic medalist Lauren Woolstencroft, who was born in Canada with no legs and no left arm below the elbow.

This is one of the three-part sports-centered Toyota will release aiming to be seen as a company with “mobility” rather than just cars.

“It’s been a wonderful experience partnering with Toyota on this global platform to tell my story of overcoming odds.  I hope that my story encourages and inspires others around the world to pursue their passions, and reach for their own personal best”. Said Woolstencroft.

The tech behind Super Bowl LII

However not everything in entertainment is related to references and celebrities, in this occasion the company Intel will and has provided the deployment of over 400 drones and cameras to cover every detail of the halftime show, in fact this happened after the company built a software to program hundreds of drones to be controlled by only one drone pilot, Intel also decided to display their LED light show in the sky, since according to them “the sky is the new way to tell stories”.

“We’re continuously pushing ourselves,” Cheung said. “I want to show this off everywhere and have the capability for audiences around the world to see what a drone light show is and see a different aspect of how you can merge technology and art together.”