Sonic the Hedgehog franchise is coming back with a new game exclusive for the Nintendo 3DS: Sonic Boom: Fire & Ice. Many people may not know it yet because the studio behind the blue hero has seemingly forgotten about it.

No campaign to advertise it and no mention on the Sonic the Hedgehog’s Twitter, but still, the 3DS title is going to reach the store shelves on September 27, 2016, with a price tag of $39,99.  More so, Fire&Ice is a prequel to 2014’s Sonic Boom: Shattered Crystal, a big miss for the franchise.

The slow-paced Shattered Crystals is a spinoff of the animated series Sonic Boom. Developer Sanzaru Games managed to capture the tone of the show, but the essence of Sonic got lost in the process, and the result was a poorly reviewed game with average sales.

The new game, however, brings an old arcade style, but its plot and cartoonish visuals are intended for kids. The title falls somewhere between the classic entries of the franchise and the modern, less attractive one. On that regard, it stays truer to the originals.

The characters of Sonic Boom’s cartoon are back

Sonic Boom: Fire & Icee sees Sonic with friends Tails, Amy, Knuckles, and Sticks attempting to stop Eggman’s evil plan. The plot involves a strange element that gives the protagonists abilities to use fire and ice. The element is of course science.

Eggman also wants to get a hold on these powers. So, to foil his ambitions, the team speeds through fast-paced levels to shut down hot-and-cold geysers in different islands.

The central mechanic of the game is the ability to use either ice of fire powers. Characters can freeze floating water into a solid block to walk upon it, or melt an ice gate to go through. The skills of the Sonic Boom 3DS edition offers players a quick breath in an otherwise speeding game. 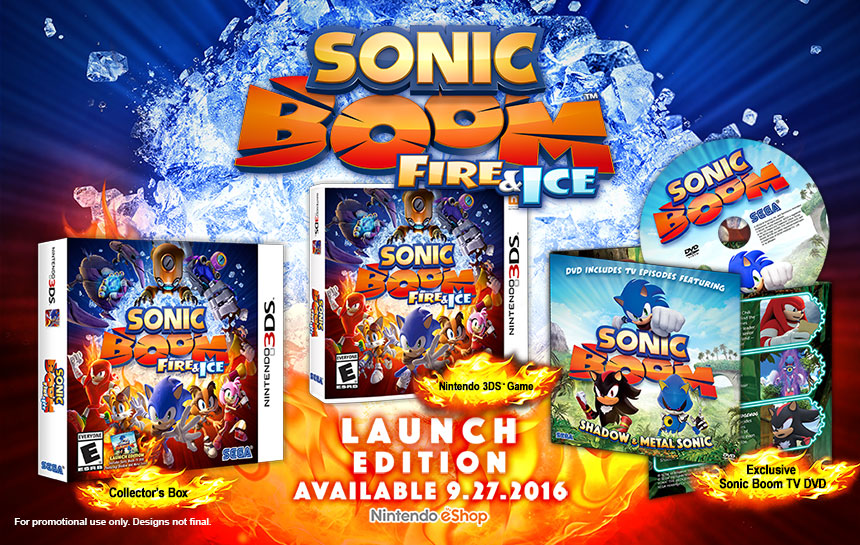 The stages are fast and provide minor touches of exploration.  Players can choose whomever character they like to play, while each one features different core abilities. For example, Sonic has unique skills that help him get through certain puzzles, but Knuckles can dig in the soft ground, and Tails has laser guns.

There are also a few collectibles in some stages that can be tricky to gather. They unlock either abilities or weapons for the cast of characters or skins and textures.

Mini-games are the easiest parts of the game

Players can find a mini-game during the campaign. The mini-games have easier navigation than the core game. Players can try to out-maneuver a fast boot in a foot race, or run on stages similar to Sonic 2’s half-pipe bonus levels.

Visually, the scenes are repetitive, and characters are undetailed. Even so, the layout feels very like old Sonic games. The gameplay is rather easy. Boss fights are the highlight of the combat mechanics. When the characters hurt the boss long enough, he will tag with other team members automatically to score the final blow.

Lastly, there are different types of secondary missions to play, two of which have the player controlling one of Tails inventions.