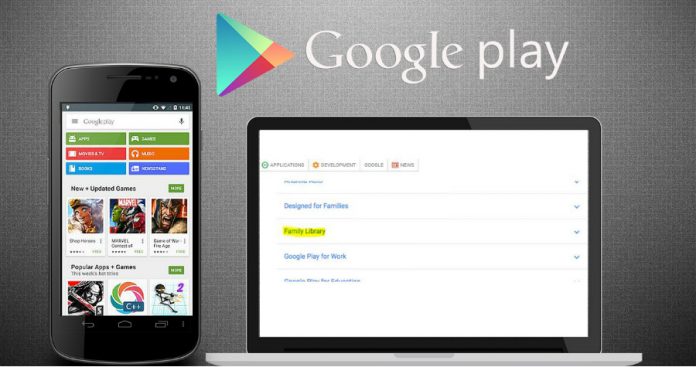 The launch follows the announcement of the revamp in Google Play Store’s categories, which are expected to roll out before November on Android devices, providing users with a more detailed array of application categories from which to choose and share with others.

Old and new content in all of your preferred devices

Google Play Family Library works by setting up a family group of up to 6 people (5 aside the main account), with the option of centralizing purchases by affiliating a master credit card for everyone in the group to use.

Furthermore, apps or content owned by users on the Family Library can be customized so they are not shared with others. For example, if you have purchased a book it will technically be part of your Family Library, but you can easily disable sharing by turning off the option. This setting is available for all content in the shared group.

Applications and games purchased prior to the month of Library’s release (July) are subject to the developer’s judgment regarding sharing compatibility, which means that some purchases made in the past may not be available for sharing even though they should be. This may change in the future, but for now rest assured about recently bought apps and games, as they will surely be eligible for sharing.

In-app purchases in games are not supported by the sharing platform, so currency or items cannot be transferred across different devices. In addition, previously purchased films and series, either single titles or full seasons, are available for sharing with others in the Family Library. However, rentals are not supported and new purchases are fair game as long as they are acquired through the family payment method setup.

On the other hand, the books purchased in the Google Play Store fall on a gray area in regards to the new sharing platform. The book publishers have the final word on whether or not their titles can be shared, and most other documents are simply not supported by the Family Library system.

Last but not least, music is out of the equation entirely as the tech giant already offers its own music sharing service through the Google Play Music platform for $14.99 a month.

Sharing for Google is better late than never

Back in 2014, Apple launched its own group-oriented sharing system, aptly named Family Sharing. Google’s Family Library is a platform with several of the same functionalities offered by their iOS competitors, but also allowing inter-device compatibility for the service and web support, which means that users within a group may access their content on iPhone, ChromeOS and online.

The service will soon be available for groups in selected locations around the world, including but not limited to Australia, Brasil, Canada, France, Japan, the U.K. and the U.S.