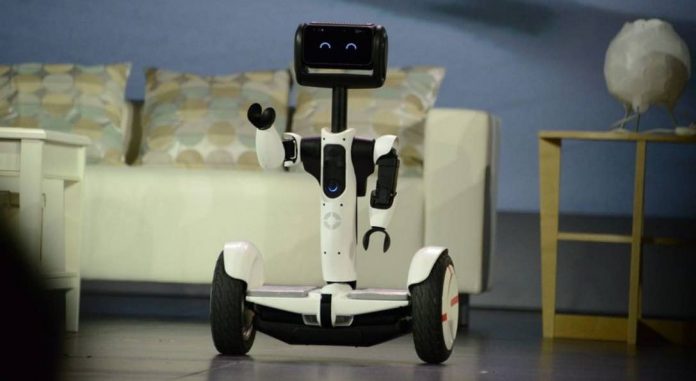 Ninebot, which has developed ‘Ninebot One‘, acquired Segway a few months ago, back in April 2015. Recently it was revealed that the brand Ninebot will come under the Segway’s Personal Transportation Business line.

The two companies have joined their powers to develop and display at CES 2016 a hoverboard which can be also used as a robot.There is a rectangular screen at the center which can be folded out and the hoverboard can be converted to a robot. The two are combined and can be used according to the needs.

CES 2016 was the venue where the new version of Segway has been presented. It is a much smarter and smaller shaped robot. The personal transportation device has the same basis as the traditional Segway, but it also features LED lights that make eyes added. In addition, a pair of arms was added to increase human resemblance.

Moreover, they have also delivered a walking robot that can transmit video and make tender expressions via its front screen. During the presentation at CES, when he adapted his arms, the robot replied with some tenderness, “Are those my arms? Awesome! “.

Just before the wrap-up of the event, one executive, who was on the platform, asked the robot to follow him, and it actually obeyed to its command. The machine does not work with a ‘smartphone‘ or any other type of sensor to track the user, but comes to him and thanks to the ‘Real Sense‘ cameras that carries, reports of the same medium. Segway has plans in mind to make this skateboard-robot available for sale in the near future.

Features of the new Segway

The Segway can travel up to 30 kilometers on a single battery charge, weighs 13 kilos and can go up to 18 km/h. When finished, you can return the head in place so that will act as the robot. In fact, that’s one of its major developments. The robot has an Android tablet technology, Intel Atom processor, 3D cameras and night vision. In addition, he is able to understand words and voice commands and respond with voice (robotics, of course). You can follow or go to different places, such as opening the door, as you are able to see through its eyes’ camera caller.

The new Segway was developed by Intel and Ninebot with Xiaomi and is expected to hit the market in the first quarter of 2017.