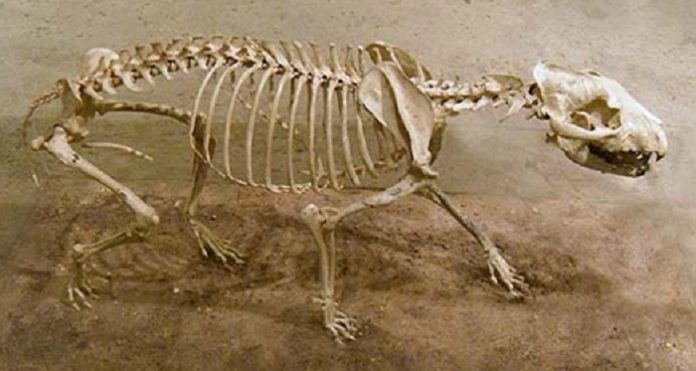 Scientists have unearthed a 12-million-year-old fossil in Maryland, and it represents a new dog species with a strong bite, according to a report on May 13, 2016.

It belongs to a family of dogs, Borophaginae and has been nicknamed bone crushers because of their strong bones and jaws.

The ferocious dog roamed in North America some 12 million years ago, and the new species has been named Cynarctus Wangi, which is a member of extinct subfamily Borophaginae.

This coyote-sized dog is much akin to present day hyenas at a time when massive sharks like megalodon swam in the oceans.

Man’s best friend , the dog has an ancient history, and not all species may be so adorable after all.

Fossils from this period of terrestrial species are extremely rare and the latest find will help to fill in many missing links from the prehistoric times. Most of the fossils discovered during this period consisted of sea faring animals. Marine animals were fossilized more easily as compared to terrestrial animals making this discovery extremely rare.

Interestingly a third of the diet of this ferocious best with extremely strong jaws consisted of meat, and it supplemented its diet by eating plants or insects, living more like a mini—bear.

This conclusion was reached after the scientists looked at the teeth which pointed out that two-thirds of its diet were composed of a the non meat diet.

Cynarctus Wangi was present all over North America between 10 million to 30 million years ago. The species was made extinct by present-day wolves, coyotes and foxes since they were better adapted to the changing times.

The last members of the Borophaginae family went extinct some 2 millions of years ago during the late Pliocene. C wangi is the last surviving member of this family.

The fossil was discovered by a doctoral student at the University of Pennsylvania.