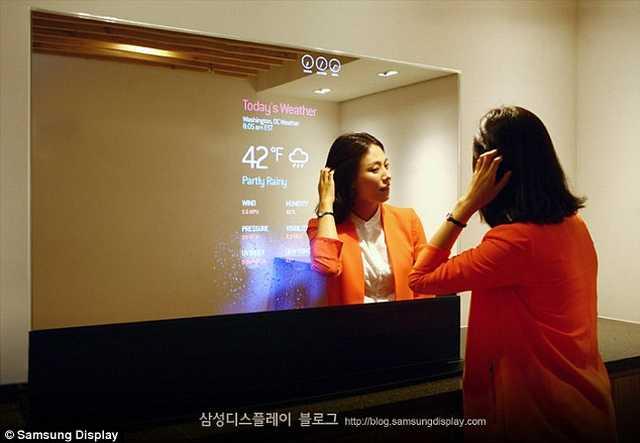 During the IFA, Samsung Electronics (NASDAQ: SSNLF) will present its last additions to the portfolio of digital signage products that the company disposes to the European markets. Among other products, we will see a transparent OLED screen as well as digital signage mirror-screens.

More specifically, Samsung and Intel teamed up to present the “Magic Mirror” during the Hong Kong Retail Expo. The two companies put together a mirror that connects to the Internet and is able to display information to people while they are getting ready in front of it. What’s more interesting is the kind of information. It’s not just general information such as weather or news directed to everyone. The Magic Mirror displays more personal information as well, such as new emails, new alerts and notifications etc. So far, the project is not a complete concept, but it’s encouraging to see that this sort of technology comes closer to reality and our real lives than ever before.

It is worth mentioning that the gadget -more as a technology rather than the product itself)-was originally designed for sales purposes in department stores. The concept for the mirror was that it would be used in dressing rooms where shoppers could ‘try on’ virtual outfits or jewelry, but the technology could eventually find its way into consumer’s homes.

At this point we should note that Samsung has not presented the transparent OLED screen to the public so far. With its thin panel that lights itself, Samsung’s OLED screen offers an impressive solution to the internal design of stores and big event rooms, providing to the customers perfect view from every angle.
Samsung hopes that its mirror display may also replace home mirrors in the future. Considering how fads take over the world these days, smart mirrors may soon become the next big thing. And you never know, the magic mirror from Snow White’s tale could be its killer app.