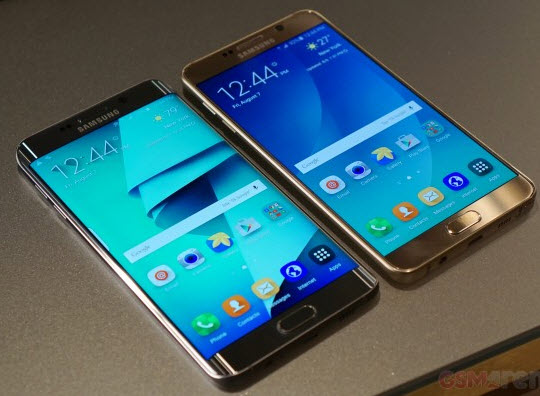 It’s about two devices with a 5.7inch screen, an Octa-Core processor and 4GB of RAM. With these smartphones (which will probably become the company’s new flagships) Samsung targets consumers that put a lot of weight to multimedia content – S6 Edge+ – as well as those who work on the move and need to take good advantage of multitasking – Note 5 with its stylus.

According to the first few info, the Samsung Galaxy S6 Edge+ will soon circulate in Europe while the Note 5 is not to enter the European markets at least for no. This is said to be a marketing move by the Korean colossal company.

At the same time, along with the two new smartphones, Samsung presented a Keyboard Cover which can be placed on the bottom part of the screen and promises easier and faster typing ability. It actually looks a lot like the classic keyboards designed from Blackberry. When no used, the Keyboard Cover can be turned to the back side of the device, so that the user can have at his disposal at any time.

Furthermore, according to some analysts, those new devices are Samsung respond to its rival – Apple – and the lead that the second one got by the release of the iPhone 6. It could also be a respond to Apple’s coming iPhone6S.

So far, we’ve witnessed that users have criticised the lack of functions and features on the curved screen of the S6 Edge. Now Samsung tries to make up for that and keep its consumers satisfied, by adding a feature called “apps edge” to the Samsung Galaxy S6 Edge Plus, which will allow fast access to your favourite apps. It will fully available worldwide by the end of the month.

On the other hand, the Note 5 will have as always a stylus, which will make the difference from other phablets of its league. The device will be available for purchase this month at the United Stated and the most vital Asian markets, while later it will be also released to other areas.