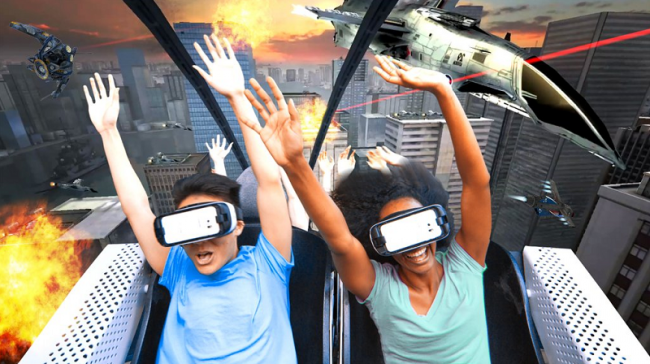 Roller Coasters are surely fun to sit on, however, looking at the sky and at the person’s head who is sitting in front of you definitely affects the experience. Samsung and Six Flags Entertainment are teaming up to try to fix this apparent problem, by equipping roller coasters at nine North American parks with Gear VR headsets that will sync their virtual worlds to the usual thrill ride movements.

This move does look the amalgamation of best of both real and virtual worlds, as sitting at a place doesn’t always have that effect as far as the overall effect of virtual reality is concerned. By timing a pre-planned VR experience precisely to the predictable dips, turns and loops of a roller coaster, passengers’ bodies will actually feel the same movements that they’re seeing in the 360° virtual world flying by on their headset screens.

Moreover, the whole setup looks like the simulator rides that we find at theme parks that simply tilt and bounce the cabin to fool the body into the sensation of screen-matching movement.

Here are the parks and specific roller coasters that will be receiving the VR headset addition.

Will you be visiting any of the aforementioned Six Flags theme parks anytime soon? Let us know in the comments below.