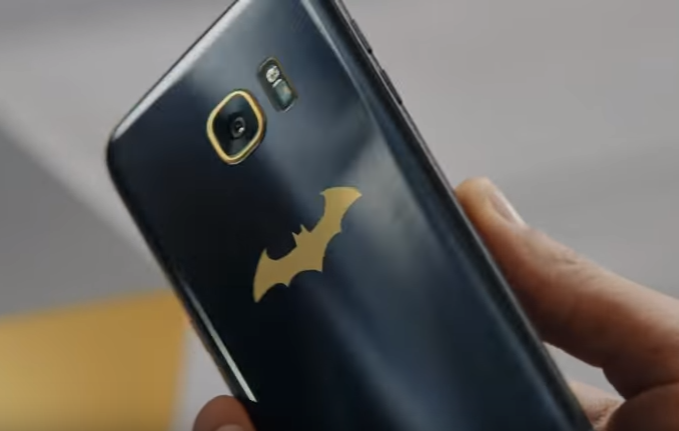 Samsung announced a limited edition of the Samsung Galaxy S7 Injustice, a ‘Batman’ inspired smartphone. The new design is set to commemorate the third anniversary of ‘Injustice: Gods Among Us’.

Samsung is committed to providing their users with the best mobile gaming experience and their partnership with Warner Bros. to develop the new Galaxy S7 Injustice edition package, further solidifies their efforts.

The Galaxy S7 comes with great performance capabilities as well as excellent graphics which makes the association between the two companies all-the-more valid. Check out the features at the official website here.

The package includes a real gold-plated Batarang that looks nifty, a Samsung Gear VR headset as well as a smartphone case fashioned out of rubber which is inspired by Batman’s armor.

The cell-phone case looks chic with a ribbed design and seems to offer enhanced grip.

The package will additionally include gaming credits for ‘Injustice: Gods Among Us’ as well as vouchers for Oculus VR content.

One the actual Galaxy S7 Injustice edition device you will see Batman’s logo emblazoned in gold on the rear as well as gold seams around the camera lens as well as the flash unit.

The home button on the front face of the device also has gold seams. Images also suggest that the limited edition model will come along with a Batman inspired theme.

The Samsung Galaxy S7 Injustice edition phones will be put up for sale in Latin America, Russia, China, Singapore and Korea next month. The company will make further announcements on its release for other markets soon.

The price for the device has not been announced by Samsung yet, but we expect to hear of it soon, considering the phones will go on sale early in June.