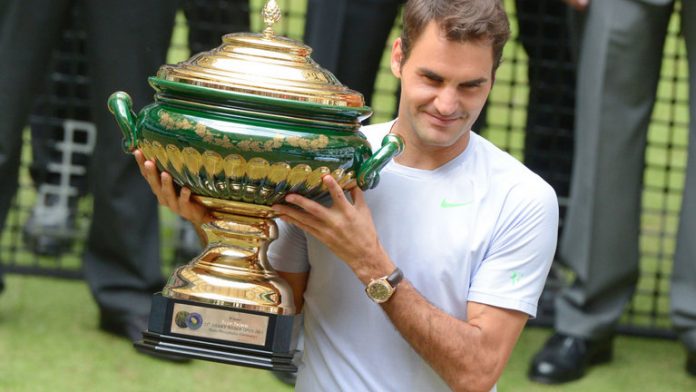 World No 2 tennis star, Roger Federer, won the Halle Open trophy with the record eighth time in his career, which is more than any other player. Roger Federer won the title after defeating Italy’s 45th-ranked Andreas Seppi in straight sets by 7-6, 6-4.

It was the fourth title of the year for Roger after winning Istanbul, Dubai and Brisbane which makes the count of winning title to 86 in total.

Roger Federer after winning the tournament title mentioned in a statement:

“It is a special moment for me, to win this tournament an eighth time.I have always enjoyed amazing support here all these years. I always enjoy it here and it is one of my favourite events.”

With Wimbledon starting from Monday 29th June, the Title victory could have given all the confidence that Roger needed going into his favorite Grand Slam. Federer who has won the Wimbledon title seven times, sounded confident to continue his good form.

On the other hand, Seppi gave a tough competition to Federer in the first set of the final game. At one junction of the game, the points were levelled at 5-5, but then Roger made no mistake in grabbing the opportunity in the tie breaker and lost just a single point to win the first set.

Seppi, who made his second appearance in the final this year, got few opportunities in the second set as well. At 4-3, Federer missed a few breakpoints that helped Seppi to win the ten-minute-long game, but after that Federer did not gave any chance to Seppi while finishing the set at 6-4.

Holding an astonishing record at Halle, Federer, has lost only twice in his career here, once against Lleyton Hewitt in 2010, and the other against Tommy Haas in 2012. The world champion vowed to come back again next year at Halle with better fitness and performance.