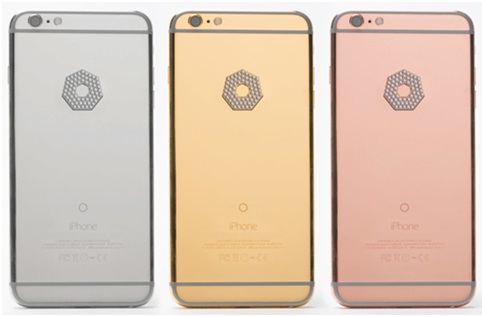 Los Angeles, US – iPhones seem to have attracted many people around the world; and owning an iPhone can be considered to be a luxury for some as well. For some people who want own an iPhone and yet want to differentiate themselves from the rest of the crowd; perhaps this might be the perfect time for them. By placing a pre-order for a luxury edition of iPhone 6S or iPhone 6S Plus with Brikk can add a dash of luxury.

Apple (NASDAQ: APPL) has not yet introduced this year’s new iPhone 6S and iPhone 6S Plus. However, Brikk has not stopped and as usual, it has added luxury to Apple’s new devices and started taking pre-orders for the modified versions of these handsets. The inner components of the iPhone 6S and iPhone 6S Plus will remain the same; but the exterior will be entirely different and will end up adding luxurious look.

Brikk is a Los Angeles based luxury brand that produces couture accessories and products for the Lifestyle and Technology industries. Brikk always wants to offer nothing but the best and that’s the reason it will only offer 128GB version. Both iPhone 6S and iPhone 6S Plus devices are available in 5 different diamond options and can be purchased in 18K pink gold, 24K yellow gold and 950 platinum. The Brikk iPhone starts at $7,995 and can go as high as $199,995. Majority of these devices will be out of reach for many. These devices are offered for those who are bored of the traditional iPhones offered by the Apple.

The cheapest model offered by the Brikk is iPhone 6S Lux which is made of 2 layers of pure 24K yellow gold; coating the entire original iPhone 6S. On the other hand, the $199,995 iPhone 6S Plus Diamond Omni is coated with the same options as the cheapest option; but also adds in diamonds of 53 carats. These models are packaged in a customized Zero Halliburton Aluminium case with a diamond embedded certificate of authenticity.

Apple is set to announce the iPhone 6S and iPhone 6S Plus at an event on September 9 and the same will be released on September 23. Brikk will start shipping of the pre-ordered luxury iPhones around 4-6 weeks after the official release from Apple. One can pre-order any of the devices either by paying in-full or by giving a non-refundable deposit which varies from $2,500 to $25,000 depending upon the chosen product.