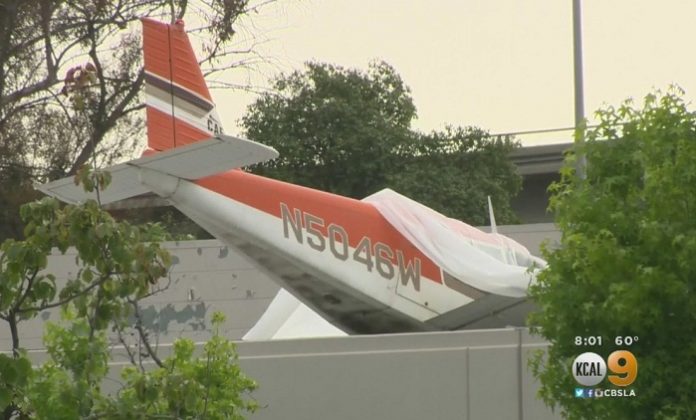 A small airplane has crash-landed on the roof of state parol building in Pomona, California on May 08, 2016.

The Los Angeles County Fire Fighting Department confirmed this news, and they made it clear that a call came at 04.40 PM Sunday informing a plane crash on the roof of a building at 901 Corporate Center Drive in Pomona. Firefighters confirmed that the plane had one person on board during the crash.

There are no major injuries reported as of now. Ian Gregor, Federal Aviation Administration Spokesman told that a single-engine piper PA-28 has crashed under unknown circumstances near Kellogg Hill Road.

The impact of the landing created two holes in the roof, as aircraft wheels penetrated through the surface. A 61-year-old man who was identified the pilot of the aircraft was soon transported to the hospital and he has some minor bruises on the forehead, along with a broken ankle. The Pilot’s wife confirmed that there is nothing to worry about her husband’s health.

She also told that her husband has been flying for the past 45 years, and this unfortunate incident happened when he was en route to Pomona from Fullerton.

Nicholas Vela, an eye witness of the incident told that he felt the danger at the very first sight when he saw a low flying aircraft in an area which has no runways. The eye witnesses soon called emergency, and they moved up to know about any casualties.

Police officials have started an official investigation to know about the cause which resulted in the crash. The Pilot has informed that the hard landing happened as the plane lost power.