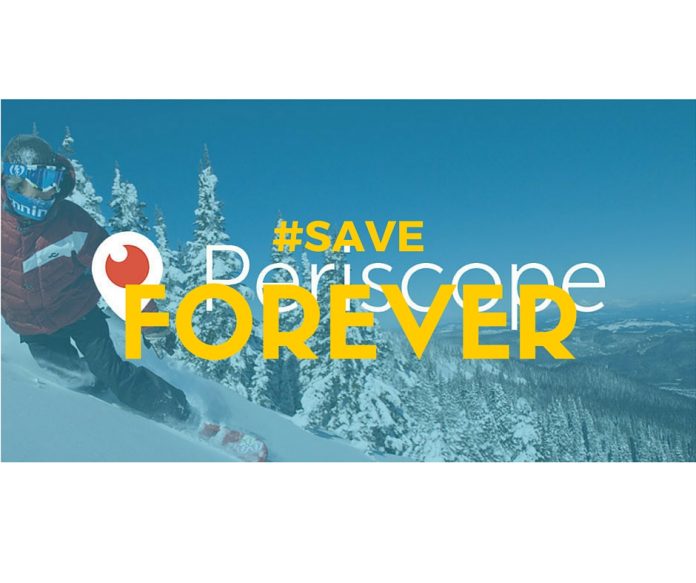 Twitter’s live-streaming service app, Periscope, has been integrated with the option of permanently saving streams, a feature that was much-anticipated and definitely enhances the overall practicality of the platform.

The announcement of the update was made live on Periscope’s channel by Kayvon Beykpour, chief executive of the platform.

Beykpour mentioned in the broadcast:

That means that this broadcast will stay forever, you can always delete it still.

The procedure of saving your stream is ridiculously easy, as all the user has to do is add the #Save tag anywhere in the broadcast title.

Furthermore, the option to save and re-watch streams has been part of Facebook’s counterpart, Live Video, for quite some time now, while industry experts point out that the specific addition was implemented in a bid to rival with FB’s respective platform.

Beykpoor further added that the social network is “actively building support for controlling how your broadcast stay on Periscope” and they are currently developing a “full solution” that will effectively offer users a wider range of options before and after the broadcast. These can be expected “in the near future“.

Despite Twitter’s user and stock performance not doing as expected during the last few quarters, Periscope seems to be moving towards an opposite direction, as the company has stated that users watch over 110 years of live video every day on iOS and Android, both of which are the two front-running names of the mobile industry.

Additionally, according to analysts, the save feature is supposed to attract advertisers, since Periscope has been planning to monetize the platform for the last few months.

It’s important to Periscope’s own strategy in terms of working with brands and advertisers for monetization. Some might have been put off by the limited time that Periscopes were available,