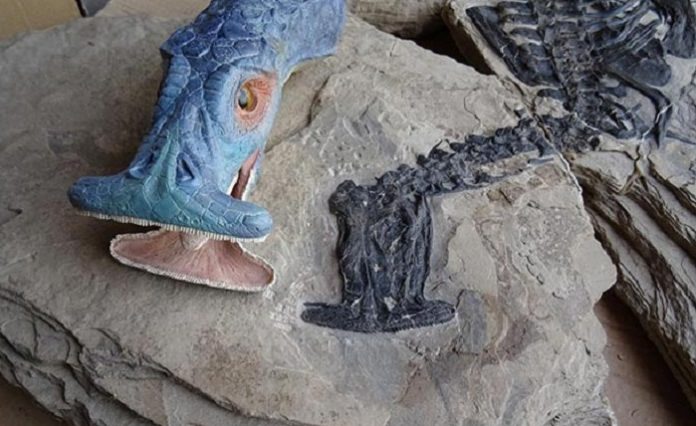 Taking cues from a 250-million-year old fossil, scientists have reconstructed a reptilian skull of an extinct Aquatic animal. The skull has been constructed by using modeling clay. Toothpicks acted as scalpels in rendering the intricate design on the ‘colored skull’.

Apparently, the mouth of the skull looks like the face of a hammerhead shark. There are rows of teeth embedded within the jaws.

The fossils have been unearthed from a city in China. Millions of years ago, the city was supposedly covered with sea.

The progress came through when the scientists decided to reconstruct the skull with bright colored putty. According to Nick Fraser, an expert on Triassic animals at the national museum of Scotland stated that “The Jaw arrangement is very unusual, and we needed to be sure with our hypothesis as to how the jaw would really work”.

Scientists have a reason to believe that the flared mouth was used to scrape the algae and plant matter from the rocks or the surface bottom. Nick Fraser further said that “after the animal used to gulp the mix of plant and sea water, it used his tongue to push out the water. The needle-like teeth would retain the plant matter while the tongue would push the excessive water out of the mouth”.

In 2014, scientists had wrongly concluded some facts about the same creature. But now, Fraser confidently reported that their hypothesis is correct because the new pair of fossils is in a good condition.

Even with a vertical zipper-like mouth, Atopodentatus unicus is a peculiar aquatic animal. It is believed that the beast existed during the early Triassic and during the Great dying, when 9 out of 10 marine species vanished, the aquatic animal braced extinction along with other species.