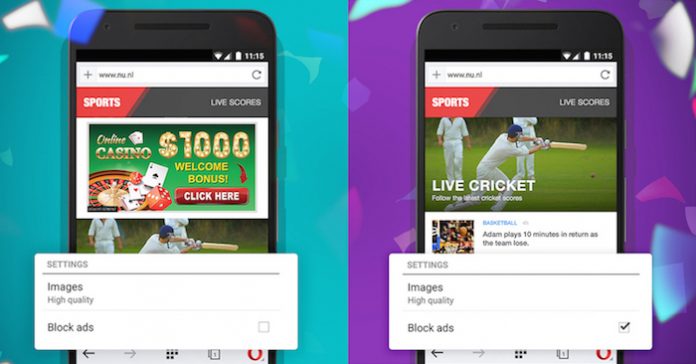 Opera Software has just announced that its desktop ad-blocker feature exits from beta stages, as a stable version launches today. The company has taken care of its mobile audience too, since the Android variant will be integrated with the option as well.

Despite not matching the user-base of Chrome or Mozilla, Opera is the first amongst the major web-browsers to offer native ad blocking. The feature was in beta for the past two months and available only via Opera’s developer program. Blocking ads

Opera CEO, Lars Boilesen, commented on the arrival of the new version:

Opera is the first browser company to offer a native ad blocker across devices. We do this because we want to provide people with the fastest browsers in the market. Our speed test shows that online ads slow down the browsing experience. Now, with Opera, you can browse a lot faster than, for example, in Chrome.

When it comes to numbers, Opera’s findings suggest that its ad-blocking feature enhances speed up to 89%, compared to browsers that do not pack ad blockers, while it is 45% faster to browsers with a third-party ad-blocker software on.

Furthermore, a few weeks back the company incorporated a free and unlimited VPN system to its desktop variant, thanks to its acquisition of VPN start-up SurfEasy, that took place last year. The particular feature is not available on the Android version, while Opera has not mentioned any plans of bringing it on mobile yet.

As aforementioned, the ad-blocker is available on Opera Mini too — the Android installment of the browser —, so make sure you download the latest update of the app to get your hands on the feature.

Additionally, Opera posted a video illustrating how to set up the ad-blocker on Android, which can be viewed below.