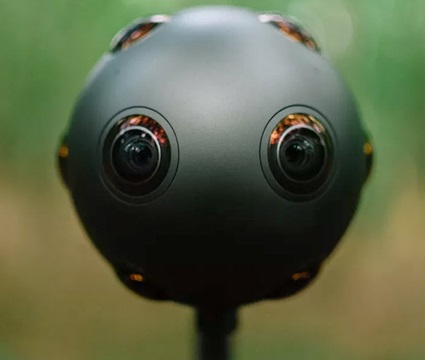 Finland – A new device/virtual reality (VR) camera that can record everything around it (in a full circle of 360 degrees) and with “3D audio” is being developed by Nokia (NYSE: OK).

This device that will be named Ozo, possesses 8 camera lenses and 8 microphones on a spherical body with only a handle protruding. As it is mentioned on BBC, the Finnish company supports that a basic advantage against the existing systems is the record of footage that can be monitored in real life, through a VR headset.

Ozo was revealed on an event on Los Angeles, where it was pointed out that the company intends to promote the product for use in Hollywood’s filmmaking industry and other professionals in the media world, more than the rest of the ordinary consuming groups.

Furthermore, with this move (by creating a device for prosumers), Nokia is following the steps of GoPro, Jaunt, Giroptic and Spherical. In fact, the company mentions that Ozo not only provides live feed through the compatible headset, but it also allows the user to watch everything on playback, which is available a few seconds after the actual scene has been recorded.

Now to the most interesting details, the product is expected to circulate before the end of this year, however the exact date as well as the rest of the technical features have not been released to the public yet. The price also remains unknown, but given that the company is targeting more professional groups and industries, it’s pretty easy to guess that the price will probably not be very convenient for the average consumer.

The time consuming need of panoramic pictures pre composition is no longer a problem with Ozo, according to Nokia. The company also supports that this product, is the first of a series of “digital means solutions” offered by Nokia Technologies.