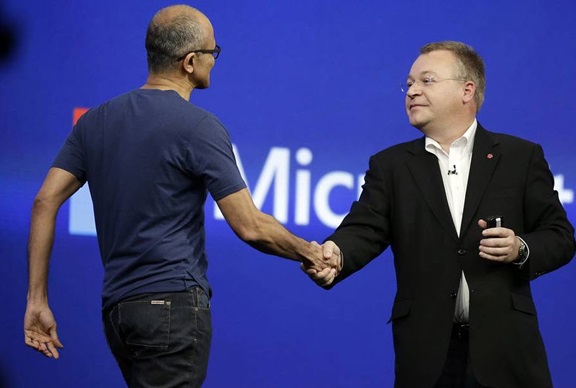 U.S. – The head of Microsoft’s (MSFT) hardware devices business and former Nokia CEO, Stephen Elop is to quit Microsoft. This position will be filled in by Windows executive, Terry Myerson. Stephen Elop’s departure is certainly a big surprise for the software giant. Microsoft’s CEO Satya Nadella announced an executive shuffle on Wednesday; however, nobody expected Stephen Elop’s departure. Apart from Elop, two more executives from Microsoft, namely Kirill Tatarinov and Eric Rudder are to leave the company after serving “designated transition period”.

Stephan Elop is not the only person associated with Nokia who is to leave Microsoft. Jo Harlow, his second-in-command executive, is also a part of this ‘departure’ list. Looking at this situation, it seems that this shuffle might be triggered because of the declining smartphone hardware business of Microsoft.

In the year 2013, Steve Ballmer purchased Nokia’s handset business for more than $9 billion; believing that Microsoft will become a strong player in the world of smartphones. However, it seems, Steve Ballmer’s vision did not quite turn into reality and may be this is the reason that several executives like Stephan Elop are asked to leave the company. In fact, sources mention that under Elop’s leadership, Windows phones lost huge market share.

The layoff can also be a part of Microsoft’s cost cutting strategy, which was announced last year. Considering the situation, Nokia’s employees were the first to be asked to leave Microsoft.

In July 2014, Stephen Elop had written an email mentioning the job layoffs in Nokia and challenges that the hardware manufacturing unit was facing off late. He mentioned in the email,

“It is particularly important to recognize that the role of phones within Microsoft is different than it was within Nokia. Our device strategy must reflect Microsoft’s strategy and must be accomplished within an appropriate financial envelope. Therefore, we plan to make some changes.”

Yet another employee of Microsoft, Mark Penn, a senior strategist is also leaving Microsoft; however it is said that his parting has nothing to do with the executive shuffle.