One of the biggest changes in the new edition is the Touch Bar replacing what Apple calls a “vestige” of computers. It is a multi-touch Retina-class bar that will work as the function keys on the keyboard.

The users can customize the Touch Bar in the Finder to put commands such as open volume controls or commands as a screen capture. Also, the retina holds a Touch ID sensor that recognizes MacOS users, unlock the device, authorize software and switch users.

The Touch Bar has a small display and a control panel. It offers a variety of controls that change according to each website or app. It also has functions familiar to many iPhone users, showing word suggestions or emojis.

Battery life gives about 10 hours of work time on both models. It is a tiny boost versus the old 15-inch Pro, but the same than the older 13-inch Pro.

Other updates include OLED Retina display for all models, a faster RAM (2,133MHz version) and a built-in solid state storage which can transfer data faster, up to 3.1 gigabytes per second.

None of the laptops have standard USB ports. Instead, they have USB 3.0 lighting ports. The specs are a welcome update. It finally puts Apple’s laptops on par with high-end Windows laptops, whereas previous models were at least a generation behind.

It is worth noting that the slimmest laptop available are the HP’s Spectre and Acer’s Swift 7, both running on the seventh-gen “Kaby Lake” Intel Core i7 processors and both less than 10mm thick. 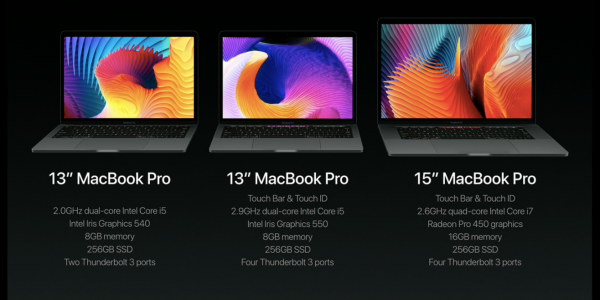 The laptops will come in silver and space gray color variations. 2016 Macbook Pros will hit the stores in two to three weeks, but pre-order is already available, while the Macbook Air goes on sale this Thursday.