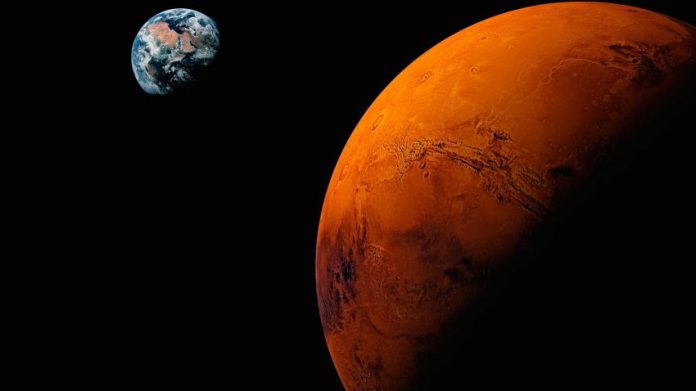 For a period of about 11 days starting from the 19th of this month until the 30th, Mars will be closest to the Earth in a phenomenon called ‘Mars opposition’. It will continue to be this close until the 30th. In preparation for this, NASA had focused The Hubble Space Telescope on Mars.

The stunning pictures released by NASA show clouds sprawled throughout the planet.

The snow-covered polar caps on the red planet was also visible. Plains like Planitia and Syrtis Major were also visible. NASA also revealed that Hellas Platina Basin, a crater made by an asteroid about 3.5 billion years ago was also visible. The Arabia Terra was also visible as a yellow part in the images. Following are the important features that have been visible so far.

The photographs will also help the scientists to study the seasons on the planet. The reduced amount of clouds in the North Pole suggests a summer season. The planet will be visible to the naked eye at night, and will be most visible right before midnight when it will appear from the southeast corner of the sky, preceded by the pale blue Saturn and the Moon.

This is the closest that Mars and Earth have been since 2005. The Mars mission is run collectively by NASA and the ESA. This will give them an opportunity to gather as much information as possible so that future missions will be performed with more efficiency. On 30th of this month, Mars will be closest to Earth as the distance will keep reducing until then.