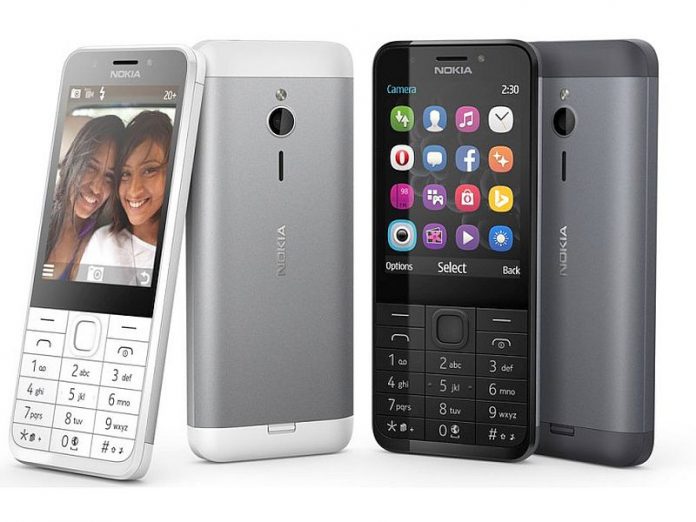 Microsoft unveiled two new feature phones on Wednesday, the Nokia 230 and Nokia 230 Dual SIM. Both the devices are akin in many respects but for the dual SIM card slot.

The Nokia 230 has modest features that include a 2.8 inch 240 x 320-pixel resolution display. The Nokia 230 is based on the Series 30+ platform. It is also equipped with 16 MB of RAM and a MicroSD card slot that will augment the memory to 32 GB.

The device boasts a 2MP front camera and a flash equipped 2MP camera at the back. The front camera can take snaps at 480p while the rear camera records at 320 x 240 resolution videos. Both the devices have a flash that is something never seen on any other phone of similar configuration and make.

The Nokia 230 is the internet enabled, so it is convenient to browse, play games and stream videos. The Nokia 230 comes pre-loaded with Opera Mini, Bing Search and MSN weather. Users can use the Opera Mini browser to visit the Opera store for different apps and games which includes “Assassin’s Creed Brotherhood” and “Midnight Pool 3.”

The 2.5G support will make sure the user will be able to use these apps. However, users will have to switch back to Mini SIM to get the connectivity advantage.

The two phones are expected to be retailed for $55 and cannot be labeled as pushovers. Both the smartphones have a 2.8-inch display coupled with integrated video player and FM receiver. Both the phones weigh less than 100 gms. There’s no Wi-Fi, but Bluetooth 3.0 is supported.