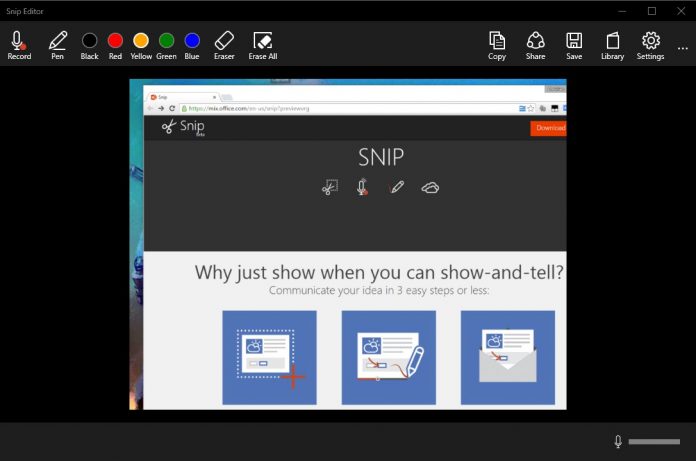 Microsoft Snip is a new tool used to take screenshots and currently available on a beta version. It is an ideal tool for people who create any kind of tutorials since besides the capture of screenshots at any time, it also allow the user to keep voice noted on the captured screenshots. There is also a stylus supported in order for the user to emphasize something or take notes on the screenshots.

All pictures that one can get with Microsoft Snip, can easily be shared on the Internet, while all of them can be stored as an MP4 clip in order to become an easy tutorial video. Microsoft’s new tool is considered to be much more powerful and useful than the equivalent Snipping tool available on Windows.

After installing the app, you will see a small box on the upper part of your screen. When you move you cursor on that box three options appear: Capture, Whiteboard and Camera.

If you click on the “Capture” option you can drag the cursor on the part of the screen that you want to take a screenshot of and then add text, arrows and draws. As mentioned above, you can also add a vocal message that will then be saved as an MP4 clip.

For this feature, the Snip app actually uses the Print Screen technology that already exists on the users’ keyboards and which can be run if you press the keys Win and prtsc.

The Whiteboard option is basically a canvas that allows you to create an image from scratch. Finally, the Camera option allows to take a picture that can used however you want.

What’s more interesting is that the Microsoft Snip seems to have “borrowed” a few features from the professional equivalent app, Snagit, which is commonly considered the best app available on its field. But then again, Snagit is not free to get. Microsoft Snip however, is free and you can get it by clicking here.