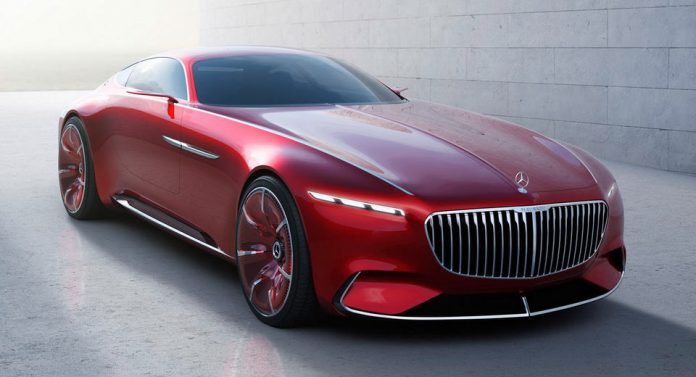 It is an electric concept car not intended for massive production, but the technology developed in its creation can be used for future electric cars.

The luxury car has 80 kilowatt-hour battery pack that can run for over 200 miles on one charge. It has a Quick Charging feature rated at 350 kilowatts, which means that could add about 60 miles of driving in five minutes, which is a great improvement from today’s common 50 kilowatts Quick Charging.

The Quick Charging could take the same time of refueling to that of a gasoline-powered vehicle if the vehicle could effectively manage to provide 350 kilowatts charging.

It has a beautiful and muscular design with a 2+2 coupe measuring nearly 20 feet in length, a very long hood and a low roof line.

According to Mercedes, the design was an homage to the “GLORIOUS AGE OF AERO COUPES.”

The Vision Mercedes-Maybach 6 has four electric motor that produces 750 horsepower, acceleration from 0 to 62 miles per hour in less than four seconds and a top speed of 155 miles per hour.

On the inside of the car, there are sensors within the upholstery that can change the interior lighting effects to match ambient lighting conditions, the temperature outside the car and even the color of the clothes of the passengers.

The Vision Mercedes-Maybach 6 can be remote controlled

A car enthusiast and YouTube user called Marchettino uploaded a four-minute video this Wednesday of the Vision Mercedes-Maybach 6 at the event in Monterey.

In the video, the YouTube user gives the watchers a better perspective on the design of the car, but the interested thing is the part where the car is controlled with a remote.

In the video, someone, most probably from Mercedes, can be witnessed with what it looks like to be a remote control while the car is moving back and forth, and at the end, he loads the car into a trailer.

This could be an interesting feature because it could help the driver of the car to park it and bring it out without major problems even in narrow spaces.