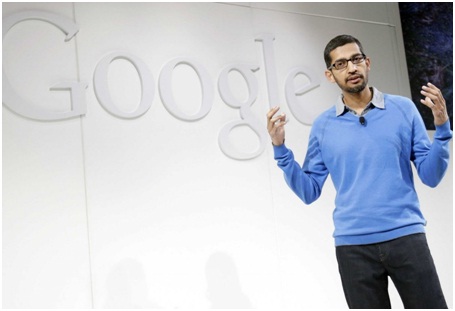 India – On Tuesday, Sunder Pichai has been announced as the new CEO of Google by the company’s founders Larry Page and Sergei Brin. This major step is taken while following the course of reconstructing, changing the whole structure of the company and at the same time, giving birth to a new parent company called Alphabet.

The new CEO of Google

Chennai, India, is the native city of Sunder Pichai who, after completing his graduation from IIT Kharagpur, went to Stanford and Wharton. And now, he will take the charge of company as the new CEO of Google, which according to Larry Page is “a bit slimmed down.”

The formation of a new parent company is a bigger step towards the future expansion of the business. While Sunder Pichai is the new CEO of Google; Larry Page himself will take the charge of the newly announced parent company, Alphabet; while, Google co-founder Sergey Brin will be its President.

So now, Alphabet will be the parent company and Google will be the part of it including other companies like Calico (which focuses on Longevity), X lab (which covers new efforts like Wing, Google’s drone delivery effort) and other units that deal with life sciences (like the one working on smart contact lens that detects blood sugar level). Here is one thing to note down; even though Alphabet will be the parent company, yet Google will remain the largest and most crucial part of it, as Google’s investment, ventures and capital will remain the part of Alphabet.

Page also said that Pichai will be a “key part” of the new structure as – “new structure will allow us to keep tremendous focus on the extraordinary opportunities we have inside of Google.”

Here is what Page has to say in the honor of new CEO of Google, Sunder Pichai-

“He has really stepped up since October of last year, when he took on product and engineering responsibility for our internet businesses. Sergey and I have been super excited about his progress and dedication to the company. And it is clear to us and our board that it is time for Sundar to be CEO of Google,”

“I feel very fortunate to have someone as talented as he is to run the slightly slimmed down Google and this frees up time for me to continue to scale our aspirations. I have been spending quite a bit of time with Sundar, helping him and the company in any way I can, and I will of course continue to do that,”

It will be interesting to see how Sunder Pichai takes Google to the new levels in coming years.